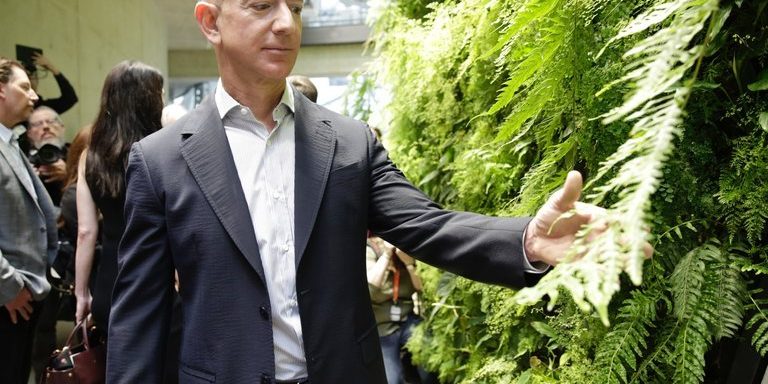 One of Amazon’s antagonists seized the moment last month with an unusual newspaper advertisement addressed to President Trump. The ad, from a nonprofit that advocates less government, attacked a Defense Department technology contract that Amazon intends to bid on, calling it a lucrative handout for the company.

A top think tank critic of Amazon’s market power also credited Mr. Trump on Twitter this month for blasting the internet retailer’s relationship with the United States Postal Service. And the head of a leading labor union said more Americans in both parties should speak out, as Mr. Trump has, about Amazon’s harmful effect on jobs.

As Mr. Trump has become Amazon’s basher in chief with his frequent Twitter attacks on the company and its chief executive, Jeff Bezos, the president has also become an unlikely ally for an array of Amazon critics. Most of them — from think tanks to advocates for local businesses — have struggled for years to build any momentum for their arguments, since Washington officials mostly held Amazon up as a beacon of innovation and shoppers saw little to dislike in its prices, selection and convenience.

Now “what Trump is essentially doing is telling the political ecosystem: Here is how you achieve your business ends,” said Blair Levin, a fellow at the Brookings Institution and a former chief of staff for the Federal Communications Commission. “He is signaling: If you want to go after Amazon, go ahead. Load up your guns.”

But while Amazon’s opponents now have the country’s most powerful bullhorn on their side, they aren’t entirely comfortable with the association.

Some are concerned about the president’s motivations for his attacks, which people close to Mr. Trump have said are often triggered by negative coverage of his administration in The Washington Post, a newspaper owned personally by Mr. Bezos. Mr. Trump has mingled his attacks on Amazon and the newspaper in some tweets, including one in early April slamming “the Fake News Washington Post, Amazon’s ‘chief lobbyist.’”

Matt Stoller, a fellow at the Open Markets Institute, a think tank that has become a vocal critic of the power of tech companies, said he believed Amazon was worthy of action by regulators in part because of its power in the book market. But he also said he found Mr. Trump’s efforts to “personalize law enforcement” troubling.

“What he’s doing is a threat to democracy, but so is Amazon,” Mr. Stoller said. “That’s the dilemma.”

Still, early this month, after Mr. Trump launched another Twitter tirade against Amazon’s deal with the Postal Service, Mr. Stoller jumped on board on Twitter.

The most direct effort to tap Mr. Trump’s hostility toward Amazon was an advertisement last month about the contract to provide cloud computing services to the Defense Department — worth up to $10 billion, by some estimates. The ad, with a picture of Mr. Bezos looking chummy next to Secretary of Defense Jim Mattis, appeared in the president’s favorite hometown tabloid.

“I had never seen that before,” Katell Thielemann, an analyst who follows the government technology contracting market for the research firm Gartner, said of the attack ad.

The ad was placed by Less Government, which calls itself a nonprofit based in Washington, D.C. Seton Motley, who runs the group, did not respond to requests for comment. He has said in interviews that he funded the ad himself. It’s unclear who backs the group, but there are large tech companies, some with connections to Mr. Trump, that have expressed their unhappiness with how the contract is structured.

The contract came up in a dinner this month with Mr. Trump and Safra Catz, co-chief executive of Oracle, according to a person briefed on the matter, who asked not to be identified because the details are confidential. Ms. Catz told the president that the way the Defense Department had written the contract, awarding it to just one vendor, was an advantage to Amazon, the person said.

So far, Mr. Trump hasn’t publicly expressed concern about Amazon’s bid for the contract. The White House didn’t immediately respond to a request for comment.

Mr. Trump recently escalated his attacks on Amazon with a presidential order to review the Postal Service’s financial model, which he has denounced on Twitter as money-losing because of favorable deals worked out with Amazon. (The Postal Service denies that deals like its one with Amazon are unprofitable.)

“The playing field has to be leveled,” he told reporters this month, promising to take a serious look at policies that might affect Amazon.

Mr. Trump’s Amazon attacks have amplified criticisms that have been building for years among research groups and trade organizations that represent Amazon’s rivals.

They have produced studies that say Amazon’s warehouses — which employ more than 125,000 full-time workers in the United States — don’t increase total local employment because of losses in other sectors. They also question the wisdom of subsidies to attract them. The American Booksellers Association, which represents independent bookstores, recently published a similar report on Amazon’s economic impact.

The United Food and Commercial Workers International Union, one of the largest private-sector unions in the country, representing 1.3 million workers in grocery stores and related industries, said Amazon’s investments in automation would hurt workers. Since it bought Whole Foods last year, Amazon has become one of the union’s top concerns.

Asked about Mr. Trump’s attacks on Amazon, Marc Perrone, president of the union, said: “Allowing Amazon’s unchecked growth to continue will lead to the destruction of millions of American jobs. Which begs the question: Why aren’t all Democrats and Republicans speaking out?”

When Mr. Trump bashes Amazon for not collecting taxes, he is echoing long-running criticism of the company by the Institute on Taxation and Economic Policy, a nonpartisan research organization. Amazon collects sales tax in states that have one for items it sells directly to shoppers, but in most states it does not when shoppers buy merchandise from independent merchants on Amazon.

Other critics — from technology pundits to a former chief executive of Walmart U.S. — have called for antitrust action against Amazon by the government, including a breakup of the company.

Amazon’s defense is that — even as it has swelled into a giant, with over $177 billion in revenue last year — its share of overall retail sales is still small, estimated to be in the mid-single digits in the United States. This, along with Amazon’s emphasis on keeping prices low, has made it challenging for opponents to spark action under current antitrust law, which is primarily focused on consumer harm.

It’s unclear if Mr. Trump can do much to get antitrust enforcers at the Federal Trade Commission or Justice Department, which are supposed to keep politics out of competition cases, to act against Amazon. But his executive order asking for a review of the Postal Service, including its relationship with customers like Amazon, could lead to changes unfavorable to the company.

In a recent opinion piece about Mr. Trump’s attacks on Amazon, the social critic Thomas Frank said he didn’t believe Mr. Trump would use antitrust laws to challenge Amazon, even though Mr. Frank would approve of such a move.

“I don’t like Amazon, and I don’t like Donald Trump either,” he wrote in The Guardian, the British newspaper.