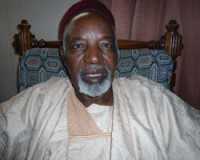 Musa, who is the National Chairman of Congress of Nigerian political party, said as long as the commission was not granted full autonomy, it would be unable to discharge its mandate without manipulation.

The former governor of the old Kaduna State told the News Agency of Nigeria in Kaduna that the issues inhibiting acceptable polls in the country ought to be addressed so as to ensure that the votes of Nigerians counted.

He said, “If the situation continues as it is today, INEC would be unable to conduct free, fair and transparent election leading to a legitimate government.

“The commission itself is not independent, politics is over regulated to the extent that it is even beyond INEC to manage.”

He also identified corruption as the bane of credible polls and development in the country.

Meanwhile, some youths from Southern Kaduna, on Monday said there would be no rigging of the 2015 general elections in the zone.

A university teacher, Dr. John Danfulani, who led the youth on campaign against election rigging in the zone, insisted that what the people wanted in 2015 was a change.

Danfulani vowed that all incompetent elected representatives would be voted out in the forthcoming polls for not indentifying with the people.

He spoke to journalists at Kachia, Sanga, Jema’a and Zangon Kataf Local Governments of the state to mark the end of the campaign.

Danfulani said the essence of the campaign was to drum the need for change to the people of the area.

He added that the campaign was not about political parties or individual neither about tribes nor ethnicity but “change.”