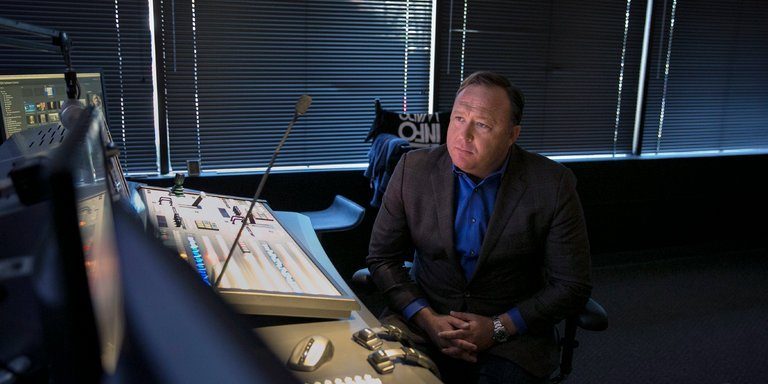 Shortly after a gunman entered Marjory Stoneman Douglas High School in Florida in February and killed 17 people, the conspiracy theory website Infowars claimed it had a photo of the attacker wearing “communist garb.” It showed a young man with a clenched fist in a red shirt emblazoned with a hammer and sickle and images of Joseph Stalin, Vladimir Lenin and Karl Marx.

But that man was not Nikolas Cruz, who was arrested two miles from the Parkland, Fla., school on Feb. 14 and later confessed to the shooting, the police said. The man in the red shirt was Marcel Fontaine, who lives 1,200 miles away in Massachusetts and has never visited Florida.

On Monday, Mr. Fontaine filed a defamation lawsuit against Infowars, one of its reporters and its right-wing founder, Alex Jones, asserting that their story misidentified him as the gunman and caused his photo to spread across social media, message boards and other websites. In the lawsuit, a lawyer for Mr. Fontaine said it appeared that Infowars published his photo simply because of his shirt.

“Mr. Jones and Infowars have long been consumed with paranoia over the prospect of communist infiltration and indoctrination,” the lawsuit, filed in Travis County District Court in Austin, Tex., said. “Over the past year alone, Infowars has featured hundreds of sensationalist articles and videos focusing on the threat of communist agitation and conspiracies.”

Mr. Fontaine declined a request for an interview, but his lawyer, Mark D. Bankston, said it was obvious that Mr. Fontaine’s shirt was not to be taken seriously. The shirt, which is called “The Communist Party,” shows Marx, the 19th century economist who wrote “The Communist Manifesto,” wearing a lampshade on his head and Stalin, Lenin, Mao Zedong and Fidel Castro drinking from red plastic cups.

“We believe that Mr. Fontaine was targeted due to the T-shirt he was wearing, and that Infowars intentionally disregarded fundamental newsroom ethics due to its desire to politicize the tragedy,” Mr. Bankston said.

Infowars did not respond to a request for comment on Tuesday.

On Monday, the website appended an editors’ note atop the Feb. 14 story that said it had previously “showed a photograph of a young man that we had received and stated incorrectly that it was an alleged photo of the suspected shooter.” It continued, “We regret that this error occurred.”

An archive of the Infowars story by the Wayback Machine shows that Mr. Fontaine’s photo was online for at least five hours.

In the editors’ note, Infowars said Mr. Fontaine later asked for the photo to be removed, but by that time, it had already been taken down.

But the short time it did appear on the site caused lasting damage, according to the lawsuit. Mr. Fontaine continues to be harassed and receive threats, the lawsuit said, and is seeking more than $1 million in damages.

Led by Mr. Jones, who has repeatedly asserted that the Sandy Hook Elementary School shooting was “completely fake” and that the Sept. 11 terror attacks were an “inside job,” Infowars attracts millions of visitors every month with stories often based on unsupported claims and conspiracy theories. With little evidence, Infowars and Mr. Jones, the host of a popular radio show, have propagated wild allegations that they have ended up having to retract.

In March 2017, Mr. Jones apologized for spreading the hoax known as Pizzagate, which claimed that top Democratic officials operated a satanic child pornography ring in the basement of Comet Ping Pong, a Washington pizza restaurant. His apology came three months after a man motivated by the conspiracy theory fired a rifle inside the restaurant. In May 2017, Mr. Jones retracted several stories and issued an apology to Chobani Yogurt in order to resolve a lawsuit filed by the company for asserting that its Idaho factory, which employs refugees, was connected to a 2016 sexual assault of a child.

The shooting at Stoneman Douglas High, along with the student survivors who have since led impassioned rallies for restrictions on guns, quickly attracted the attention of far-right provocateurs. A month after the shooting, YouTube cracked down on some fringe groups whose conspiracy-theory videos had climbed the site’s “trending” list. YouTube issued a warning against Infowars, which had published a video that falsely claimed that a Stoneman Douglas student, David Hogg, was a “crisis actor.”

In the lawsuit, Mr. Bankston said that the Infowars story about the school gunman fell in line with the site’s overall strategy. “These sorts of reckless lies are what caused a disturbed individual to enter a pizzeria and begin firing,” he said.

“Alex Jones is no longer a gimmick or sideshow. His audience rivals that of major cable networks, yet he refuses to exercise the most basic journalistic integrity,” Mr. Bankston added on Tuesday. “What happened to Mr. Fontaine is the predictable result of the reckless practices Mr. Jones has fostered at Infowars.”