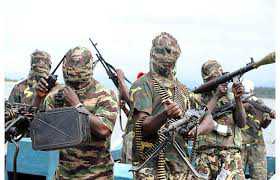 Pulka is north and about 20 kilometres from the destroyed Gwoza town which is also located between Borno and Cameroon Republic surrounded by Mandara Mountains.

Although, this was not the first time Pulka is been attacked, the latest attack which occurred on Thursday evening was the deadliest one with quite a number of residents being killed with houses, shops, and vehicles set ablaze before the insurgents dislodged the community and established themselves in the area.

A competent and reliable source told our correspondent that “the insurgents, large in number using Rocket Propelled Launchers, Improvised Explosive Devices and petrol bombs invaded Pulka and opened fire on innocent civilians before overpowering security operatives and vigilante groups and hoisted their flags”.

This development, according to our correspondent’s findings, forced some Internally Displaced Persons who ran away from the Gwoza attacks of last three weeks and resettled at neighbouring Madagali town of Adamawa State including residents to vacate their community following the sounds of explosions and gunshots that ensued from the terrorists.

One of the Gwoza refugees who was in Madagali, Mr. Yakubu Jidda, told our correspondent that “the latest attack on Pulka forced many people in Madagali including the displaced persons to flee to neighbouring Mubi and Gombi towns of Adamawa for fear of possible attacks from the terrorists who now operate freely without confrontation from security operatives.”

A close political associate to Governor Kashim Shettima from Gwoza who is not authorised to talk to the press confirmed the attack and taking over of Pulka community by Boko Hat am sect on Thursday.