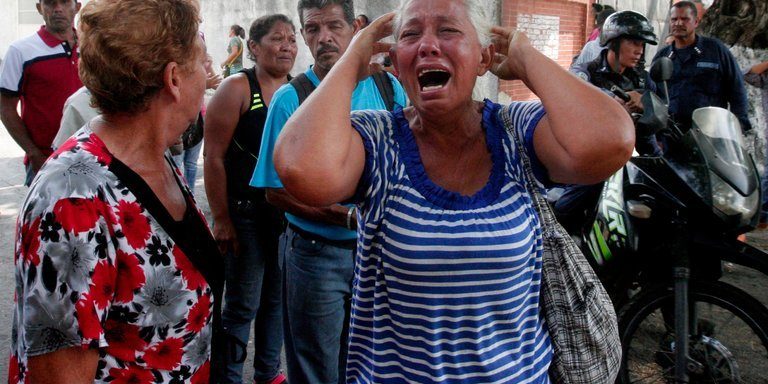 VALENCIA, Venezuela — Like most jails in Venezuela, the one attached to the police station in the northern city of Valencia was packed beyond capacity. Built to house roughly 60 inmates, it contained about 200.

Simmering anger fueled a riot there on Wednesday morning: A prison guard, wounded by a knife, was taken hostage. Inmates threatened to kill him with a grenade unless their demands were met. Others set mattresses alight.

The fire turned the jail into an inferno. Emergency workers punched holes in the walls to let the smoke disperse and the inmates escape. But by nightfall, 66 men and two women — who were evidently at the jail to visit loved ones — were dead and scores were injured. Enraging Venezuelas and rights advocates, the police fired tear gas and rubber bullets at grieving relatives who gathered outside the jail overnight demanding information.

Late Thursday morning, a policewoman came outside and spoke to relatives demanding answers. She had a small sheet of paper in her hands.

A woman immediately raised her hand and yelled, “I’m his mother, yes.”

“He died,” the policewoman said.

The mother started crying. She said her son had less than a year on his sentence.

The policewoman recited some names of inmates who had survived the fire and then shouted: “Look, I haven’t had any breakfast, so let’s calm down. These are the names I have, that’s it.”

With Venezuela in an economic collapse even worse than the Great Depression and its public health system in free fall, inmates throughout the country are going hungry. Protests are on the rise. Weapons and drug smuggling are prevalent, as is bribery of guards and of the heavily armed groups who hold sway over cellblocks and police holding cells like the ones in Valencia.

Other marks of the crisis include hyperinflation, extreme shortages of food and medicine, constant electrical blackouts, thousands of children dying of malnutrition, rampant crime in every province and looting and rioting in the streets.

The fire was one of the worst disasters in the history of Venezuela’s prisons and its toll surpassed the 61 who died in a riot at a prison near Barquisimeto in 2013; the 17 who died in a fire in Tocuyito, near Valencia, in 2015; and the 37 who died in a prison uprising in Puerto Ayacucho, in the state of Amazonas, last August.

Inmates’ relatives said on Thursday that they had been told the fire started after the authorities tried to break up a party overseen by gangs — known as pranatos — that have paid off or intimidated the prison staff to permit drugs, alcohol and sex. On Wednesday, they said, wives and girlfriends were permitted to visit their loved ones at the prison.

“The police wanted to get into the dungeons. They wanted to enter by force. T hat’s what my brother told his wife,” said Rosa Guzmán, 40, describing the account her sister-in-law gave. “We came here and the police were very aggressive. They made us run.”

Another woman, 20-year-old Yesenia Morillo, said that she had two nephews awaiting trial inside the jail.

“Last week, an internal fight caused one death, but that’s normal,” she said of the jail, adding that her nephews had survived the fire.

“They said there was a party and that police asked them to shut down the party and the prisoners didn’t want to end the party,” she said. “So one prisoner took the policeman’s gun and then they started shooting and the police shot a woman. That’s when everything started.”

María, 56, who lives around the block from the jail and who insisted that her surname not be used because she fears reprisal, said the authorities fired rubber bullets on angry crowds who had congregated nearby to demand answers.

“I’ve been living here 55 years and it’s the first time I’ve seen something like this, so big,” she said.

María described the jail as a chaotic mess. On weekends, she said, a truck delivers ice and food for the parties overseen by the gangs, and prostitutes regularly enter and leave the police station attached to the jail.

The Venezuelan Prisons Observatory said it had warned for a long time about the untenable situation at police station jails, where detainees are often kept far longer than the 48-hour holding period mandated by law after an initial arrest. Venezuelan prisons have long suffered overcrowding, a situation which has led to international condemnation and riots by the prisoners themselves.

The most notorious occurred in a packed prison complex known as Rodeo, outside of Caracas, where riots in 2011 and 2012 left dozens dead. That led then-President Hugo Chávez to form a government ministry devoted to overseeing the prison population.

But reform efforts did not go as planned, experts say. In the years that followed, the new ministry ceded much of the authority of running the prisons, once in hands of wardens, to the prisoners themselves. This led to the rise of mafia bosses who essentially ran the prison complexes in extortion rackets.

Worse for those in the state of Carabobo, of which Valencia is the capital, it seems their cells weren’t under the ministry’s authority.

Being part of a police station, the jail was a place meant to hold inmates for short periods of time after arrest, said Jeremy McDermott, the co-founder of Insight Crime, a research group which has studied Venezuela’s prison system. In recent years, as traditional prisons have become overcrowded, police jails have been used as an overflow area for the inmates.

“People have spent months, if not years in these holding cells — ones that don’t fulfill even basic human rights,” said Mr. McDermott, who said that police often have no budget to care for the prisoners. “A large percentage haven’t had their case heard.”

The Venezuelan Program of Education-Action in Human Rights, known by its acronym Provea, is one of the main humanitarian organizations in the country. It said on its Twitter account that the “indolence” of the government had contributed to the death toll.

Critics within and outside Venezuela condemned the country’s leftist authoritarian government on Thursday, as reports emerged that the police had used tear gas to disperse relatives who had gathered in front of the police station in Valencia to demand information.

The United Nations human rights office, which has repeatedly criticized Venezuela for jailing and beating political opponents, censoring critics and failing to protect citizens from malnutrition and disease, noted “widespread overcrowding and dire conditions” across Venezuela’s penal system, in which police cellblocks are often used as permanent detention centers.

“These conditions, which often give rise to violence and riots, are exacerbated by judicial delays and the excessive use of pretrial detention,” the human rights office said, while urging the authorities to investigate and provide reparations to the victims’ families.

Henrique Capriles, an opposition leader who has been barred from holding public office, wrote on Twitter: “How many more times are we going to see the same scenes horrific with the country’s prisoners? More than 70 deaths crammed into a police headquarters shows the failure of a government that is obliged to guarantee the lives of Venezuelans.”

Another opposition leader, Antonio Ledezma, a former mayor of Caracas who fled to Colombia last year, suggested on Twitter that Venezuelans should rise up against their leaders, as Tunisians did at the start of the Arab Spring.

In 2015, the most recent year for which reliable figures are available, 49,644 people were incarcerated in prisons designed to hold 19,000 inmates, InSight Crime reported last year. An additional 33,000 people were held in temporary holding cells built for 5,000, it said.

Armed gangs control life in many Venezuelan prisons and many people die in detention. More than 6,600 people died in the country’s prisons between 1999 and 2015, Human Rights Watch reported, citing data from the Venezuelan Observatory of Prisons. Last year, a mass grave holding 15 bodies was found by construction workers at a prison in the state of Guárico. At least 23 people were killed in weeks of battles between armed prisoners and Venezuelan security forces in a jail outside Caracas in 2011.

Rafael Lacava, the governor of the state of Carabobo, expressed his condolences and promised “a serious and thorough investigation,” which he said the nation’s Interior Ministry, along with prosecutors and police, would participate in.

A spokesman for the state government, Jesús Santander, posted a passage from the Book of Isaiah on Twitter.

“The Lord longs to be gracious to you; therefore he will rise up to show you compassion,” it says.