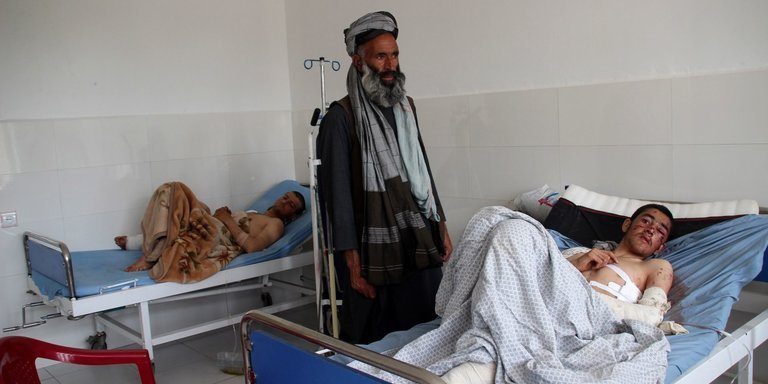 KUNDUZ, Afghanistan — A day after Afghan security forces killed or wounded more than 100 people in the bombing of a religious seminary where they said senior Taliban figures had gathered, officials on Tuesday admitted that civilians had been among the casualties.

For much of Monday, even as the bodies of wounded and dead civilians — including children — arrived at local hospitals, the Afghan government maintained that its airstrike in northern Kunduz Province had killed only Taliban leaders in a nonresidential area. Late Tuesday, the office of President Ashraf Ghani acknowledged the harm to civilians and said the bombing would be investigated.

The United Nations mission in Afghanistan said it was “actively looking into disturbing reports of serious harm to civilians,” and the Kunduz governor’s office said, “In these airstrikes, in addition to armed opposition, unfortunately some of our civilian countrymen have also been killed and wounded.”

The exact number of casualties resulting from the airstrikes, which occurred in the Dasht-e-Archi district, remained unclear. Afghan officials put the total at 57 to 70 dead. Some local officials believe the number to be higher.

Officials would not publicly say how many of those were civilians, but one senior security official said that about 35 percent of the dead were civilians — mostly children who were students at the seminary. He said the dead ranged in age from 8 to 65.

In Kabul, Gen. Mohammad Radmanish, the Defense Ministry spokesman, showed the news media surveillance footage of armed men at the site of the attack in the lead-up to the bombing, as well as grainy pictures of Taliban leaders whom he said were boarding vehicles to attend a meeting at the site. In impassioned remarks, he listed the names of more than a dozen senior Taliban commanders who he said had been meeting to plan “bloodshed and atrocities.”

“Our MD-530 helicopters attacked them, but the wounded brought to the hospitals were hit by bullets and small-arms fire,” Gen. Radmanish said on Tuesday, suggesting that the Taliban had opened fire on civilians, despite his assertion the previous day that no civilians had been in the area of the attack.

“We have received 57 wounded so far, their ages ranging from 7 to 60,” said Naeem Mangal, the director of the 200-bed regional hospital in Kunduz, who added that the wounds were “mostly from explosives or bombs.”

Abdul Matin Atefi, the provincial health director of Kunduz, said 26 bodies had arrived in hospitals and clinics. “We don’t know how many of those are civilians or Taliban, but the Taliban usually do not allow their dead or wounded to be registered in clinics,” he said.

A senior security official, who was not authorized to speak to the news media, said that a graduation ceremony had been taking place at the seminary, and that senior Taliban leaders had gathered in a side room. Because of the recent increase in airstrikes, the group’s leaders often choose meeting places that they think will not be bombed by Afghan and coalition forces.

The security forces’ initial strikes targeted the side room rather than the main space where hundreds were gathered for the graduation, the official said. The civilian casualties resulted when the strikes continued after civilians and Taliban began running, he said.

As the Afghan forces’ air capabilities have increased in the past couple of years, so have concerns over disregard for civilians in harm’s way, especially as the Taliban often fight from villages and densely populated areas. Much criticism has been directed at Mr. Ghani, who, in trying to bolster his struggling military in the face of a brutal enemy, has often remained quiet on civilian casualties.

“The Afghan government’s efforts to track civilian casualties is far behind what is needed as aerial operations increase,” said Patricia Gossman, the Afghanistan senior researcher for Human Rights Watch. “The failure to investigate, and to follow through to see what goes wrong, means they can’t ensure it won’t happen again.”

“At the moment,” she said, “the pressure to kill Taliban seems to mean they are not simply taking the precautions they should.”

Mawlai Sattar, 36, said he had been at the graduation ceremony along with his 7-year-old son who was helping out on the day.

“When the bombing started, I fled,” said Mr. Sattar, who had become separated from his son at the event. “At home, the women told me that the boy hadn’t returned, so I started running back barefoot, and I saw that half of his jaw was missing and he was lying there with the other martyrs.”

“If they had killed Taliban, my heart would not be at this much pain,” he said, estimating that around 20 Taliban had been present.