Achebe’s school to be rebuilt 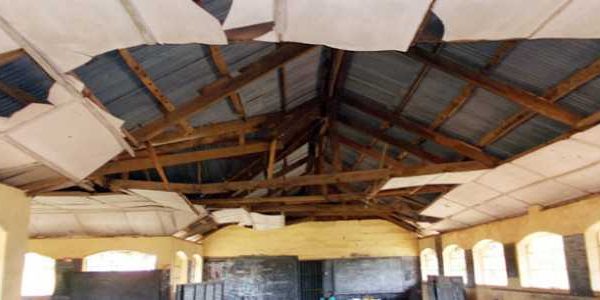 As Goodluck Jonathan reacts to Education Review story, promises to rebuild St. Philip’s Central School, Akpakaogwe, Ogidi, Anambra State
The special edition of Education Review, Tuesday, April 30, 2013, which focused on the “Untold Story of Achebe’s school days,” attracted the attention of President Goodluck Jonathan, we can now authoritatively reveal.
The edition which harped, among other things, on the “Lessons from Chinua Achebe’s schooldays” did note that “Achebe’s school has lost its former charm, colour.”

Armed with stunning photographs, the Education Review edition in question, showed the dilapidated state of his former schools, namely St. Philip’s Central School, Akpakaogwe, Ogidi, which Achebe attended from 1936 to 1942, Central School, Nekede, Owerri, which he attended from 1942-1944 and Government College, Umuahia, where he schooled from 1944-1948.
Under the subheading: “The School of the famous should not be a monument of infamy, but of fame,” Education Review, in the words of Achebe, observed that “unless the wind blows, we do not see the fowl’s rump.
This is one unforgettable lesson we learn from the death of Chinua Achebe: that the schools he attended while alive, starting from St. Philips, Ogidi, Central School, Nekede to Government College, Umuahia are in various stages of rot and disrepair.”
“A visit to the Akpakaogwe Primary School, Ogidi, shows that the state of dilapidation is such that some of the classrooms have been deserted by both teachers and pupils, while the only one being managed has no ceiling or good roofing. Mrs. Anulika, one of the teachers, lamented the death of Prof. Achebe whom she said had been the source of encouragement to both the teachers and pupils of the school.
‘He built a library for us and promised to renovate this building before he died,’ she said.
‘We are not happy that he died at a point when he wanted to come to our rescue.” Education Review learnt that those words of the teacher and the accompanying photo (republished on this page) worried the President to no end. According to a source close to the Presidency, so worried was he that he promised to do something about the dilapidated state of the school.
So, during the burial service on Thursday, May 23, which witnessed a large turnout of people from all walks of life, including diplomats from Canada, USA, Germany, Niger Republic, the President promised to rebuild the old primary school, with support from President John Dramani Mahama, his Ghananian counterpart, in honour of the late Achebe.
Nobody knows how the late Prof. Achebe, a man in whose mouth proverbs are like oil with which words are eaten, would have put it, were he alive but while the announcement attracted commendations from some of the guests who felt it is proper that that should be done, others felt that the President should have opted to build a befitting research centre at Ogidi, either, for younger generations.
But if it doesn’t sound like a piece of good news to you, it is for Mrs. Ngozi Oraka, the Headmistress.
In a chat with reporters after the President’s announcement, Oraka who was full of joy over the promise, noted that apart from one Mr. Mrs. Onwunili “who renovated the school when the roofs were rotten and blown off by wind and painted it with our choice of colour” and another man from Nkwele Ogidi, who “fixed burglary proofs in the buildings and built class demarcating boards for the halls,” no other person, including the old boys and girls, have thought it necessary to do something about the dilapidated state of the school.
“I’m very happy to receive this news,” she said. “We have been waiting for a day like this. Many people have visited the school in the past, including Achebe, while he was still alive but they haven’t done anything to that effect.
We send our gratitude to our President and that of John Mahama of Ghana. This is the best that has happened to this school.”