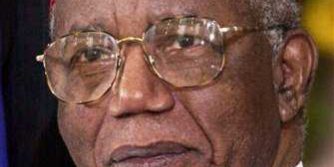 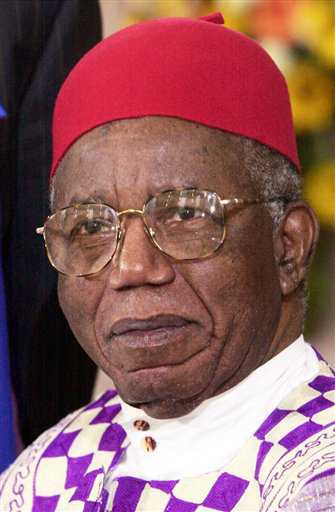 AT 6. 00am yesterday, the remains of 82-year-old Nigeria’s literary icon Chinua Achebe, who died in a Boston hospital arrived Nnamdi Azikiwe International Airport, Abuja from his US-base. The body was released by government officials led by the Secretary to the Federal Government, Chief Anyim Pius Ayim.

The casket, carried by pall bearers in traditional Igbo attires was ushered into the reception hall of the domestic wing of the airport in a procession led by Rt. Rev Owen Nwokolo who, in a brief sermon, prayed for the repose of Achebe’s soul saying, “We are gathered to say nno (welcome) to Achebe. He has come back, though dead but we know that his works keep him alive. We are gathered to receive him because of what he has accomplished throughout the world.”

He praised the departed literary icon for his exemplary and transparent life and called on Nigerians to learn from Achebe’s transparency and selflessness.

Also speaking, Senator Pius Anyim, extolled the virtues of Achebe and said his death was a terrible loss to Nigeria and urged the family of the author to bear it with strength.The body was accompanied by Achebe’s wife, Prof. Christie Achebe, his children Chidi, Chinelo, Nwando and her husband.

Dr. Ike Achebe, the first son of Achebe expressed his appreciation for the support his family has received since his father’s death on March 21.

He said: “I want to appreciate everyone that has worked tirelessly to ensure that the transition is peaceful. I thank you all”.

After the airport reception, the casket was ushered into a smaller plane, escorted by Achebe’s widow and other dignitaries for onward flight to Enugu where a reception was also held in his honour at the University of Nigeria, UNN, Enugu campus.

At the senate session held in his honour late Achebe was formally declared absent having confirmed his demise by sighting his corpse which laid in-state at the Enugu campus of the university.

The senate and indeed the entire university community paid glowing tribute to Professor Achebe whose demise, they said, would leave a void in the hearts of people and the University of Nigeria where he is revered as a great academic and administrator.

Professors, Associate Professors, Senior lecturers, and other scholars, draped in their flowing academic gowns, filed past the casket wrapped with national flag bearing the remains of the late author of Things Fall Apart.

Professor Christie Achebe, his widow, children and Engr Austin Achebe, his elder brother and leader of the Achebe family were among personalities on ground at the airport to receive his corpse.

A dark Mercedes Benz R500 belonging to M.I.C funeral undertakers conveyed the casket to the University of Nigeria, Enugu Campus and a special Senate session was held in his honour presided over by the Vice Chancellor, Prof. Bartho Okolo and attended by other scholars. The event which was attended by members of Achebe’s family and his associates in Enugu State commenced at 3: 45pm and ended 6pm.

“We are gathered for the purpose of paying our last respect to Emeritus Professor Chinua Achebe,” Prof Okolo told the large audience drawn mainly from the university community.

During the special Senate, there was a long roll call of all the professors who are members of the senate. All of them answered their names but when Achebe’s name was called severally, everywhere was dead silent without Achebe responding.

“Dear colleagues, it is unlike Emeritus Professor Chinua Achebe, our revered man of letters, the literary giant, the Eagle on Iroko, to stay silent at the mention of his name,” Okolo said.

After formally announcing the passing of Achebe, the Vice Chancellor said: “For the avoidance of doubt, may I call his name one more time: Emeritus Professor Chinua Achebe! (still no response). Truly, this is a solemn confirmation that the earthly sojourn of our revered colleague, Emeritus Professor Chinualumogu Albert Achebe, our compatriot who rose to become a citizen of the world has come to an end. It is, therefore, with profound grief and regret that I preside over this special senate in his honour.”

Okolo described the late icon as “a truly distinguished academic of international status and one of the finest academics that the University of Nigeria has ever produced.” He added that Achebe was one of the best creative minds of the present generation, stressing that the late writer told the story of Africa in over 50 different languages.

“In doing so, he brought various aspects of the political history and socio-political existence of Nigeria to the attention of the world,” he said, adding that “Achebe will be remembered as a remarkable teacher, an astute administrator, creative genius, a story teller and author of extra-ordinary ability.”

The UNN VC said Achebe, during his life time, enjoyed a larger than life image as a world renowned literary giant, adding that in addition to his winning many literary awards, “his creative works, which often had prophetic undertones, drew world attention to African literature.”

However, at the end of the session, the motorcade bearing Achebe’s remains left Enugu for Awka where another funeral would take place in his home state, Anambra ahead of his internment at his Nkwelle Ogidi hometown in Idemili Local Government Area tomorrow.