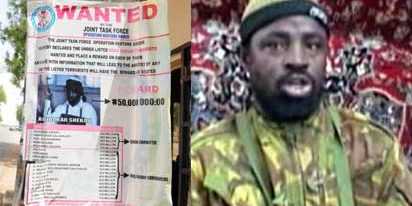 yesterday. He also took time out to threaten more attacks, telling President Goodluck Jonathan that his men are already stationed in the Federal Capital Territory (FCT) and its environs.

Shekau who spoke in Arabic and Hausa in the video boasted, “We are the ones that carried out the attack in Abuja.” The deadliest attack ever in the federal capital targeted a bus station in the Nyanya area of the capital city where early morning commuters and other people were caught in the explosion.

Dressed in military uniform and seated with a Kalashnikov resting on his left shoulder, Shekau addressed President Jonathan directly saying, “We are in your city.”

The video, which comes nearly a week after the dastardly act, confirms initial speculations by military and government authorities that the bombing was carried out by insurgents loyal to the Abubakar Shekau-led Boko Haram Islamist group.

Shekau’s latest video was released just as the search continued for 85 schoolgirls still missing after a mass abduction of students in a boarding school by the Islamists also suspected to be Boko Haram fighters.

Hours after the Abuja bombing, gunmen stormed a girls’ school in the northeast and kidnapped 129 students, an attack also blamed on Boko Haram that has sparked global outrage. Forty-four of the girls have escaped so far, according to officials of the school and Military authorities.

Parents have been scouring the bush for days looking for the kidnapped girls. “We have been contributing money to buy fuel for motorcycles and vehicles to help in the search of our innocent daughters.”

Shekau and his men, blamed for killing thousands since 2009, claim they are fighting perceived imbalance in the system and they want to create an Islamic state in northern Nigeria.

Boko Haram, which means “Western education is forbidden”, has been attacking schools, homes, church, mosques and government buildings since it started the five-year uprising.