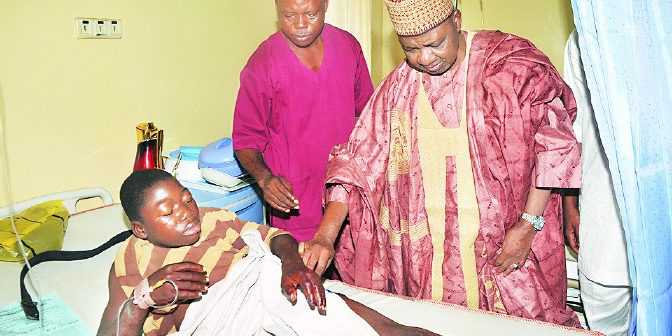 has lost her legs as part of measures to save her life.

Also, another victim of the blast, a Senegalese, has died, putting the death toll now at 22.

Daily Sun gathered that the legs of one of the victims, Mrs. Gloria Ejike, who was referred to Alliance Clinic, were amputated as doctors battled to keep her alife.

Doctors said the victim, who is on danger list, was being monitored despite the amputation of her two legs.

The Senegalese victim died at about 8p.m. on Wednesday.

Confirming the death, the Public Relations Officer of the National Hospital, Abuja,  Dr. Tayo Haastrup, said the Senegalese, who was admitted in the Intensive Care Unit of the hospital, sustained 90 degrees burns all over his body, which left him with little chance of survival.

“We received about two of those casualty victims from Maitama. So, as at today, we have about eight bodies in the mortuary. One of them is a Senegalese. He died as a result of very serious burns. We have six from the accident emergency and two were brought in from Maitama, which brings the total of those receiving treatment currently to eight,” he said.

Checks by Daily Sun revealed that some of the survivors were also being treated in private hospitals in the Federal Capital Territory (FCT), besides government hospitals in Maitama, Wuse, Garki and the National Hospital.

At Alliance Clinics, one of the private hospitals where survivors are receiving treatment, its Medical Director, Dr. Christopher Otabor, assured that patients under his watch would be given quality care.

At the Maitama General Hospital, Daily Sun gathered that eight victims were being treated, while two, who sustained minor injuries, had been discharged.

A member of staff explained that the hospital could only cater for 10 persons due to insufficient beds, while the remaining 33 survivors were referred to other hospitals.

A consultant at the Accident and Emergency Unit said the hospital was able to treat and discharge some of the victims on Wednesday.