Abia monarch under fire over remarks on Orji 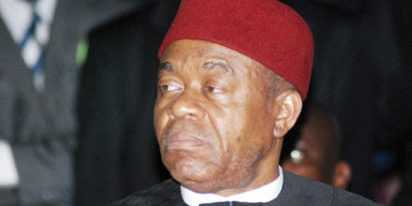 An Abia  monarch and traditional ruler of Aba , the commercial capital of the state, HRM Eze Isaac Ikonne has been reprimanded by the Special Adviser to Gov. Theodore Orji on Electronics Media, Mr. Ugochukwu Emezue for his media remarks on the  governor where he allegedly said “Orji  had not performed.”

Emezue who spoke with journalists yesterday in Umuahia accused the royal father of self contradiction haven in “2012  written a letter of commendation  to the governor for efficient performance.”

He wondered why a traditional father who ” is supposed to be the conscience of the people would be speaking from both sides of his mouth in a desperate attempt to malign a serving governor”.

Emezue accused the monarch of fabricating lies and deliberate attempt to disparage the governor to score political points.

He vehemently disagreed with the royal father that Orji’s predecessor , Dr. Orji Uzor Kalu posted more achievements than he, insisting that Orji is the best governor so far in the history of Abia State considering the array of legacy projects he has delivered.

The Governor’s aide further argued that Orji had since improved on the achievements that earned him Ikonne’s commendation in 2012, explaining that the royal father’s sudden hostilities are politically motivated.

He further posited that Orji’s administration had invested so much funds in Aba more than any government since the history of Abia state, contending that Aba is not the only city to be given attention in the state.

Emezue argued that ” Abia  is a three city- state and deserves enormous resources for appreciable development ” unlike some states that are only one- city state, hence, the governor should be applauded considering his numerous achievements with the available scarce resources.

He therefore, advised members of the opposition to criticise constructively and not to resort to malicious distortion of facts in a bid to disrepute those in authority or pull down a perceived political opponent .