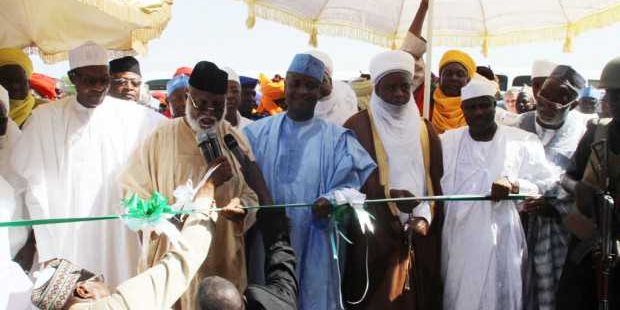 Sokoto, the headquarters of the Caliphate yesterday hosted political big wigs in one of the largest political gatherings in recent times.

But it was an educational event that attracted the who-is –who in politics. The Sokoto State University, conceived by Governor Aliyu Wamakko was inaugurated by former Head of State Gen. Abdulsalami Abubakar.

Others in attendance included House of Representatives Speaker Aminu Tambuwal, a son of the soil, former Head of State Gen Muhammadu Buhari, who is a leader of the opposition All Progressives Congress (APC) and his counterpart former Lagos State Governor Asiwaju Bola Ahmed Tinubu. Also present was

All the guests underscored the importance of education. Sultan of Sokoto Alhaji Sa’ad Abubakar also said without education, there cannot be progress.

Gen. Abubakar urged the management of the new university to strengthen efforts at meeting global best practices so as to attain academic excellence and standards.

“You have to blend local contents with global orientation in its teachings and research, so as to attain global best practices,” he said.

“If the institution has to be relevant and has the ability to integrate its products in the society, should strengthen its scope as a knowledge-driven concern”, he added.

“The students should get the best education, while the teachers and other staff members of the university, must do the best in their duties”, he urged.

“I am rejoicing with the people of Sokoto State who had shown that they are in search of development,” he said.

Tinubu described education as the greatest weapon against poverty and ignorance, saying,” it is the only chemical that can break down differences.

“I salute the courage, commitment and understanding, and we will continue to colloborate with you in your endeavours” he said.

Tinubu, who noted that there were complexities in the country, appealed to Nigerians to use their differences for advancement.

Gen. Buhari described education as the most important determinant for any people to enhance their participation in public affairs.

According to him, the Federal Government has not being able to adequately cater for its universities.

He lamented the growing number of qualified applicants unable to gain admission into the universities.

“There are many Bachelors, Masters and Doctorate degree holders who have remained without jobs.

“This is due to insensitive leadership because, an educated community ought to be able to create jobs for its people,” he added.

Wamakko, who attributed the triumphant success to Allah, thanked God for making the university a reality.

According to Wamakko ” it is in the overall interest of the public and for the development of the educational sector in the state and Nigeria”, he added

Former Vice President Atiku Abubakar said no nation or society can be rightfully placed on development without education.

“The importance of education cannot be over emphasized in any society or country,” Atiku said, adding that “the efforts of the Sokoto State government for establishing the institution is highly commendable,” he added.

Amaechi appealed to his colleagues to place education on top priority.

The Sultan of Sokoto decried killings in the name of religion.

Sultan Abubakar said: “The Sokoto Sultanate council, all traditional rulers and the generality of the Muslims, have dissociated themselves from such dastardly acts.

He told former Head of State, Gen. Abubakar when he visited him that ” Islam abhors the killing of any innocent souls, without following the due, legal processes.”

According to the monarch, “we are always committed to the growth and development of Islamic religion, but in line with its teachings and law.

“Muslims should even persuade non-Muslims to join the religion by their good conduct and strict adherence to the Islamic law.