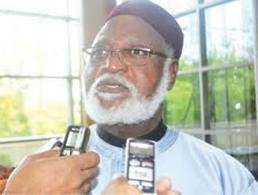 FORMER Head of State, Gen. Abdulsalami Abubakar has appealed to members of the Presidential Committee on Dialogue and Peaceful Resolution of Security Challenge in the North to protect repentant Boko Haram members from victimisation by the Federal Government.
Abubakar urged the amnesty panel to ensure that the militant sect’s members that voluntarily give themselves up should be protected from being victimised by the authorities.

He said this when members of the Presidential Committee visited him in his hilltop residence in Minna.
The ex-head of state,  explained that although, the task given to the panel was  tedious, the international community was watching to see the outcome of their assignment.
“The teaming unemployed but highly educated youths are a threat to peace in any society. While government cannot employ everybody, we must create the right environment for them to thrive.”
Abubakar said, “The eyes of the whole world is on you to see what you can do and what you can come up with in this assignment, hence you have been given a task to discuss with people on ways to stop violence and come to the round table to proffer solution.”
Abubakar, who lamented the carnage in the North, explained that the senseless killings had left so many families in grief, urging Nigerians to join the committee members to pray for the Boko Haram members to have a change of heart.
“If you go to the North especially Borno and Yobe where this is happening you will weep especially for women and children have become orphans, women became widows and people separated from one another”.
He expressed sadness that despite repeated calls, the Boko Haram sect had refused to hearken to the voice of reasoning and lay down their arms.
“Violence don’t solve problem, you must come to the table. Without doing that your grievance is meaningless.”
Earlier, the committee chairman, who is also the Minister of Special duties, Alhaji Taminu Turaki, implore Abubakar to use his wealth of experience and contacts in assisting the committee towards persuading the leaders of Boko Haram to dialogue with the committee.
He said, “We know your worth internally, you have contributed immensely to the peace of this country and we want you to always assist us when the need arises so that we can proffer a lasting solution to Nigeria crises”.