Abduction: We saw no soldiers in bush, say victims’ parents 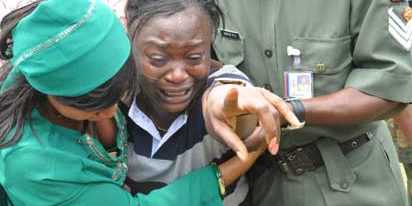 PARENTS and relations of students of the Girls Secondary School Chibok in Borno State abducted by suspected insurgents returned home yesterday without any of the girls.

They alleged no soldier went in search of the girls because none of them was at sight throughout their stints in the farthest parts of the bush.

The parents told the Hausa service of the BBC that throughout their 12- hour search in the forest, they did

not come in contact with any soldier but found abandoned huts, breads and vehicles possibly belonging to security agents.

There was no trace of the girls, the parents added.

One of the parents, who spoke with the BBC on condition of anonymity, said throughout their fruitless search in the Sambisa forest, they did not come in contact with any Nigerian soldier in the forest.

He said they began their search in the forest at about 6 am but could not trace any of the abducted female students until they gave up the search at about 6 pm.

According to him: “We were about 200 in the forest but we had to return back. We couldn’t sleep there; we saw nothing but make shift huts that were erected in the bushes.

“We saw vehicles like that of security agents in the bush, there were so many things, and there was even bread.

“We however saw a different set of people who asked of our mission and we told them. It is a very thick forest and anyone would be scared to explore the forest.

“Contrary to claims by the authorities that soldiers were in the forest trying to rescue the school girls, we saw nobody; we didn’t see any vigilante agent too. We did not see any security agent, even in our dreams. These soldiers, we didn’t see any”.

The Borno State Government yesterday said it is searching for 84 students of the Government Girls’ Secondary School, Chibok.

It said although one of the missing students returned to the school yesterday, she was not among those abducted.

The Commissioner for Education, Mr. Musa Kubo, made the disclosure in an update last night against the backdrop of sustained search for the school girls by parents and volunteers.

It was learnt that those in the search team were locked up in the forest to secure the release of the girls.

The statement by Kubo said: “I am afraid we do not have an update that is as encouraging as Friday’s. Only one of our missing students returned today (Saturday).

“She was not among those abducted. She was however one of the 129 girls at the hostel on that black day the Government Girls’ Secondary School, Chibok was attacked.

“She ran out of the school during the attack and thereafter, went to her parents. She was brought back by her mother on Saturday.”

Kubo, who gave a breakdown of the rescue operation, said the 45 girls in the school are being reconnected with their families.

He added: “So far, we now have 45 students back in school. Out of this number, 28 escaped from abduction while 17 fled home during the attack and returned home.

“As at yesterday, we had 44 students. Today, we have 45 while 84 are yet to be found. Like I explained in yesterday’s release, all the accounted girls are being reconnected with their families as a tactical measure pending the return of their colleagues and subsequent decision by the State Governor on the way forward.

“Like I also said yesterday, we are hopefully expecting the return of our 84 students as intensive search and rescue efforts continue. I once again like always, acknowledge the combined efforts of the security agencies and civilian volunteers for their patriotism”.

A top security source, who spoke in confidence, said: “Most parents, local vigilante groups and sympathisers involved in the search have opted to remain in the forest to secure the release of the girls. This is the level of patriotism which parents and locals have demonstrated so far.”