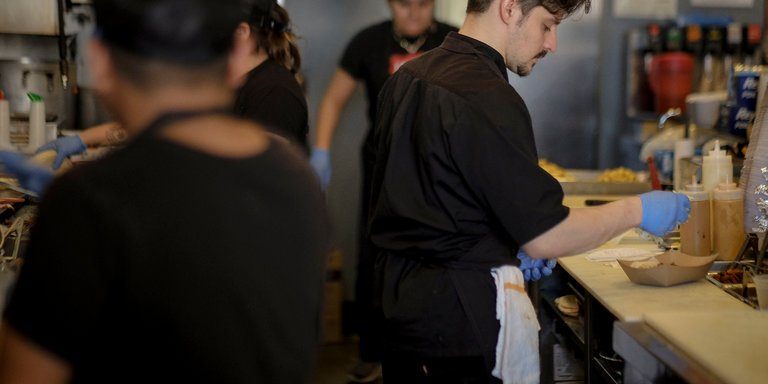 WASHINGTON — The owner of Taco Bamba Taqueria peered out from the kitchen at the line of customers snaking around the corner at his latest spot in a suburban Virginia strip mall, and felt terror. Who was going to cook, serve and clean up for all these people?

“The cooks had left,” overwhelmed by the crowds, said Victor Albisu, who owns four Taco Bambas in the region, with a new upscale Mexican place on the horizon. “The wait staff had left. The chef and sous-chef had walked out because of the amount of business. It doesn’t stop.”

A tight labor market and an explosion of new restaurants have made finding and keeping help ever more difficult across the country.

In 2017, the National Restaurant Association reports, 37 percent of its members said labor recruitment was their top challenge, up from 15 percent two years ago. With low profit margins leaving little room to do what most businesses do in tight labor markets — increase wages — restaurant owners are having to find other ways to attract and hold onto workers.

They are offering incentives, like repaying culinary-school tuition for their chefs. They are hiring former prisoners as kitchen assistants, and snapping up employees whom competitors have fired. They are trying to retain employees with tequila-tasting seminars, flexible schedules and a faster pipeline up the ranks.

“I think the assumption is, the industry has to continue to evolve in terms of the work force it is trying to appeal to,” said Gordon Lambourne, a spokesman for the National Restaurant Association Educational Foundation. “People want flexibility, they want some growth defined for them.”

The growth in dining out is clear. The nation added 15,145 restaurants, a net increase of 2.5 percent, just between the third quarters of 2016 and 2017, according to the United States Bureau of Labor Statistics.

“Everybody eats out,” said Gerri Mason Hall, the head of human resources at Sodexo in North America, the giant food service company and cafeteria operator, which also vies for restaurant workers. “We are competing for executive chefs, front line cooks, the entire talent pool.”

The demand for highly skilled help is especially acute in Washington, where a boom in restaurants run by creative chefs is outstripping the region’s labor force. Zagat named Washington, once considered a second-tier city in the culinary world, as the nation’s hottest food city in 2016.

Established players from around the country have moved in, like the chef David Chang of the New York-based Momofuku group and Stephen Starr, the Philadelphia restaurateur behind the Washington hot spot Le Diplomate. Danny Meyer, the New York restaurant mogul, is on his way with an outpost of Union Square Cafe.

In November, the last month for which data is available, food service accounted for half of all net job growth here, a 7.5 percent increase over the previous year, according to the Department of Labor.

Restaurant industry experts say the recent crackdown on undocumented workers has sent a further chill through the business. Dishwashers and other low-wage restaurant workers have long been recruited from the nation’s undocumented work force, but many restaurateurs are wary now of going to that well.

“Our industry is very much in need of a temporary visa program for the low-skilled, essential workers,” said Shannon Meade, the National Restaurant Association’s director of labor and work force policy. While visas are available for seasonal work, she added, “a year-round program would go a long way to addressing our hiring and retention issue.”

The labor shortage has at times altered the nature of restaurants, as well as the quality of service. “In some cases I believe it has changed the direction certain restaurants had originally planned on,’’ said Mr. Albisu, the Taco Bamba owner. “There is less polish.”

Many diners complain about restaurants where the food is expensive but the service is lacking. Water glasses are left unfilled. Guests stand waiting for attention at a host stand, and servers with little knowledge of the menu merely smile sheepishly as sophisticated customers ask questions.

Lindsay DiSalvo, the assistant general manager at Metropolitan Hospitality Group, which operates several restaurants in the Washington region, recently spent one of her rare days off poring through the résumés of 15 applicants for a coming venture without finding anyone suitable. “I was freaking out,” she said.

The more experienced workers, she said, are attracted to the increasing number of Washington restaurants with high-profile chefs, leaving midlevel establishments like hers struggling with inexperienced and often fickle help. One woman seeking a position at the bar, she said, “could not name a single varietal of wine.”

Mr. Albisu said pride long ago succumbed to desperation. “I can name two dozen people who left my company to start a new place who came back looking for their old jobs back,” he said. “In the old days we would say, ‘Hell, no.’ Now we say, ‘Sure.’ We chefs call each other and say: ‘Have you fired anyone we can repurpose? I know he can’t plate, but maybe he can just grill.’”

Chris Floyd, the owner of Capital Restaurant Resources, a recruitment firm, said a central problem is that Washington does not naturally attract people interested in food. “People don’t come here for restaurant careers,” he said. “They came here to be in government or go to grad school or be lawyers. The population hasn’t caught up with the demand in the hospitality industry.”

So chefs and restaurant owners are casting their recruitment nets more widely.

“What we need to start doing better than ever is breaking down the stereotypes of who typically gets these jobs,” Mr. Meyer, the founder of Union Square Hospitality Group, said during a recent panel discussion in Washington. “We are holding job fairs right now with organizations we were not even thinking about five years ago,” he said, including those that assist people with learning disabilities, older workers and former prisoners.

Still, he said the group could do more. “We can only fit so many students in our cramped classroom in the basement of a homeless shelter,” he said.

The National Restaurant Association has begun several programs for high school students and adults who have trouble getting work, including apprenticeships through the Department of Labor and a new initiative that helps place veterans into food service.

Taco Bell and McDonald’s both announced in recent weeks that they would expand programs to help employees pay for college tuition.

Chris Coombs, the chef and owner of the restaurant group Boston Urban Hospitality, has offered to repay culinary-school loans. “One consistent theme of our cooks is that they all had student loan debt,” he said. “It was one of many tactics.”

He even outsourced the unpleasant duty of deep-cleaning the kitchen that usually fell to 20- to 30-something line cooks. “I think millennials are really focused on quality of life,” he said.

He has also tried to clean up the kitchen in other ways. “You can’t come to work and scream at people,” he said. “When I was a younger chef, that was how I interacted with my team. We have a lot more positive training methods now.”

Michael Schlow, who owns restaurants around the country, offers his team educational workshops on wine and spirits, and recently took two chefs on a trip to Italy to study cooking techniques and eat.

“We don’t win them over with a paycheck,” he said. “Pay is important, but of more importance is respect and admiration and learning. If people feel like they are learning, they are more apt to stay.”

The #MeToo movement has had an impact as well. Accusations of harassment and worse against well-known chefs like Mario Batali and John Besh have shed light on abusive and discriminatory practices in the industry that many owners say will have to change if restaurants want to attract workers, particularly women.

Restaurateurs must start “taking care of their staff,” said Aaron Silverman, the owner of the celebrated Rose’s Luxury, on Capitol Hill. The goal is restaurants that are as professionally run as other businesses — “places that just happen to serve food.”