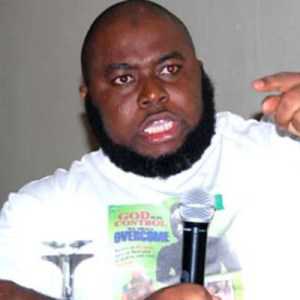 ABUJA – Following reports of planned negotiations between the federal government and the Niger Delta Avengers, NDA, the leader of Niger Delta Peoples Volunteer Force, Alhaji Mujahid Dokubo Asari has broken his silence, warning against his inclusion in the negotiation team. Dokubo-Asari He also warned against associating his name in the matter, stating categorically that he had not appointed anyone to be his representatives.

Asari who was former national president of Ijaw Youth Congress and also the leader of Niger Delta Peoples Salvation Front, NDPSF, vowed never to negotiate with the government of President Mohammadu Buhari.

He instead accused the President of waging a genocide war against the Ijaw nation, saying that the President was paying lip service to the negotiation plan. Asari who conveyed his views through a public disclaimer he splashed on his Facebook wall on Sunday night, stating that he believed in the cause of Ijaw Nation,Niger Delta Region and The United States of Biafra(USB). He warned that ” for every action there must be an equal and opposite reaction….You can’t sow to the winds and expect not to harvest a whirlwind in return.”

The former warlord stated that he would never condemn the activities of the Niger Delta Avengers, NDA, saying that unless there was a Sovereign National Conference, SNC, was convoked on issues of Ijaw, Niger Delta region and USB, and a plebiscite that would be monitored by the United Nations, UN, there would be no peace in the mentioned territories.

Asari wrote: “The public should note that I,Alhaji Mujahid Abubakr Dokubo-Asari,Alabo Edi Abali -Abala Buruburu 1 of Kalabari had not entered,directed,appointed or delegated any person or group of persons to negotiate or enter into dialogue with any president,vice president,governor,minister,national security adviser,any committee or institution in furtherance of the nigerian states pretension to the pursuance of peace in the occupied Ijaw,Niger Delta Region and The United States of Biafra(USB).

“Therefore, anybody who had presented himself/herself claiming to me or represent me in any manner of discussion, fora or conference in furtherance of this pretentious negotiation or dialogue is a fraud and therefore should not be accorded any recognition as a person representing me, the Niger Delta Peoples Salvation Front and Niger Delta Peoples Volunteer Force. “I am convinced and firmly believe that the occupation gambari and their collaborators in the Nigerian state led by General Muhammadu Buhari is not interested in any or in any type of peace in Ijaw, the Niger Delta Region,In the Territories of the United States of Biafra or even in any part of nigeria. “The body language of general Muhammadu Buhari is to carry out a genocide and a pogrom against the Ijaw,Niger Delta and the United States of Biafra(USB).

“Therefore,there is no way I will be hoodwinked to be part of any sham that the government of the nigerian state led by General Muhammadu Buhari is masquerading as negotiation or dialogue that will lead to peace in the aforesaid territories….The same way the bride Amnesty was introduced-which I and the volunteers rejected-was used to bribe the faint hearted amongst our compatriots,the cult gangs and fraternities,and the criminal elements in the Niger Delta to allow the our hydro carbon resources-which is our God given and exclusively belong to us- to be freely extracted to satisfy the extravagant and immoral appetite of the Gambari and their collaborators… “Today most of the recipients of the Amnesty Bribe are full of regrets and wish that they turn back the hands of clock.

“In furtherance to the above-stated reasons,I have no cause to be part of any negotiation or dialogue in the present general Muhammadu Buhari contrived crisis in the Ijaw territories to give him an excuse to carry out his well thought out plan to execute his genocide and pogrom against us….since I am not a member of the Niger Delta Avengers or any of the other internet groups trying to obliterate the shine of the heroic explores of the Niger Delta Avengers.

Some people had severally opined that if I am not an Avenger I should publicly disclaim them…Why should I do so? What is my business to be a busybody in this matter?Why should I take panadol for someone else headache? I will never disclaim,denounce or condemn the Niger Delta Avenger…. “For I am a known advocate of this truism that for every action there must be an equal and opposite reaction….You can’t sow to the winds and expect not to harvest a whirlwind in return.

“Finally,the public should know that I am not part of any negotiation or dialogue and had not mandated,nominated,appointed or authorized any person or group of persons to represent me in any dialogue or negotiation with the government of the Nigerian state led by general Muhammadu Buhari. “My believe is that only a SOVEREIGN NATIONAL CONFERENCE with the resolution for a PLEBISCITE SUPERVISED BY THE UNITED NATION can lead to permanent peace in Ijaw,Niger Delta and the Biafran territories.”