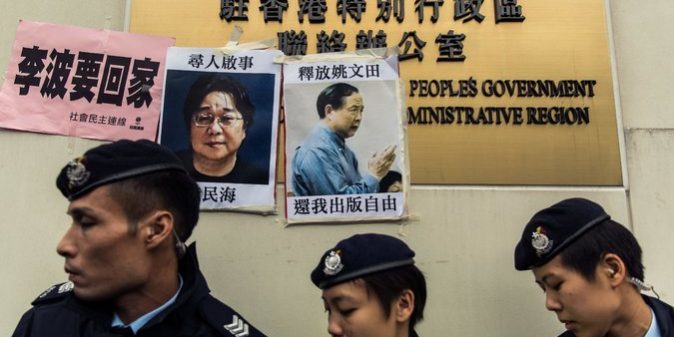 HONG KONG — On a recent afternoon, the staff of The South China Morning Post, a 114-year-old newspaper, gathered around roast suckling pig in their lavish new headquarters in Hong Kong to celebrate a remarkable turnaround.

Readership has been surging. The Post has launched new digital products and added dozens of journalists. After more than a decade of decline and editorial chaos, the newsroom now buzzes like a tech start-up, with table tennis and an in-house pub serving free craft beer.

The revival began with The Post's acquisition two years ago by the Alibaba Group, the Chinese technology and retail giant. But if Alibaba is breathing new life into the paper, it has also given it a new mission: improving China’s image overseas and combating what it sees as anti-Chinese bias in the foreign media.

In effect, Alibaba has taken Hong Kong’s English-language paper of record since the days of British rule and put it on the leading edge of China’s efforts to project soft power abroad. Every day, The Post churns out dozens of articles about China, many of which seek to present a more positive view of the country. As it does, critics say it is moving away from independent journalism and pioneering a new form of propaganda.

Alibaba, which has been open from the start about its ambitions for the newspaper, envisions a day when The Post is the dominant news organization in the world, riding the momentum of China’s rise as a superpower.

“We are going to be watched, and people are going to pay attention to us,” Joseph C. Tsai, a co-founder of Alibaba, said during the celebration last month, comparing The Post to an underdog competing for the first time at the Olympics.

But journalists worry that Alibaba, which has become one of the most highly valued companies in the world in part by maintaining good ties with the Chinese government, is abandoning The Post’s history of scrappy reporting to please Beijing.

“By explicitly stating that its aim is to tell a positive story of China and running questionable stories, management undermines the very attributes that make the S.C.M.P. useful in the first place,” said Yuen Chan, a journalist and senior lecturer at the Chinese University of Hong Kong.

As businesses and governments around the world look for ways to skirt the traditional news media, The Post has become a test case for how a new owner can co-opt an established brand to promote certain viewpoints. Alibaba executives say they want to present a “fair and balanced” alternative to foreign media, a mission statement that echoes Fox News.

Gary Liu, a Harvard-educated technology entrepreneur who is the Post’s chief executive, said the newspaper could offer a more nuanced portrait of China than Western news outlets, with a staff of 350 journalists in Asia, including about 40 in the mainland.

“We are not here, certainly, to promote the views and wishes of Beijing,” said Mr. Liu, who was previously chief executive of Digg, a news aggregation site in New York.

But a culture of self-censorship at the newspaper predates its purchase by Alibaba, said Wang Feng, who served as The Post’s online editor from 2012 to 2015. He said top editors routinely rewrote, played down or withheld critical stories for fear of offending influential Chinese officials or business executives.

“It was often done in a very hush-hush manner,” said Mr. Wang, now the editor of the Chinese-language website of The Financial Times. “You could see that people were not exactly free to speak their minds.”

That timidity has persisted under Alibaba, according to more than a dozen Post journalists who, speaking on condition of anonymity, described how the paper shies away from investigative reporting on Communist Party leaders and contentious subjects such as human rights.

Last year, The Post retracted a business column that suggested an investor in Hong Kong had ties to a trusted adviser to President Xi Jinping and had used his connections to amass wealth. The editors said the column made “insinuations beyond the facts.”

Its author, Shirley Yam, a well-respected financial commentator, resigned. In a statement, Ms. Yam defended her column, saying that editors had vetted the piece extensively before its publication.

Some critics said the more notable change under Alibaba may be The Post’s ramped-up production of articles that present China in a friendly light.

In February, Post journalists said, the Ministry of Public Security pushed the paper’s top editors to send a reporter to interview Gui Minhai, a political critic and Swedish citizen whom the Chinese police had snatched from a train.

Mr. Gui was then quoted saying he had broken Chinese law and did not want help from the outside world. In its coverage, The Post said that the interview with Mr. Gui was “government-arranged.”

“The Post risks being a vehicle in Beijing’s overall propaganda machinery,” said Willy Wo-Lap Lam, a scholar at the Chinese University of Hong Kong and a former Post journalist.

Mr. Xi, China’s most powerful leader in decades, has all but eliminated critical reporting in the mainland, placed new pressure on Hong Kong media and ordered a vast expansion of China’s publicity machine, with state broadcasters merged into a single entity called the “Voice of China” to strengthen China’s international messaging.

Chow Chung-yan, who oversees coverage of China and Hong Kong, denied The Post yields to pressure from Beijing.

“We are independent and free,” he said. “We don’t have people calling into our newsroom asking what we will publish.”

The Post’s editor in chief, Tammy Tam, a former Hong Kong television broadcaster, declined to be interviewed. “We believe in reporting freely, fearlessly and in accordance with the highest editorial standards,” she said in a statement.

The Post’s leaders say that Alibaba executives, who have offices a few floors above the newsroom, are not involved in editorial decisions. But Mr. Tsai, the co-founder who spoke at the celebration last month, maintains a close connection, offering occasional feedback on coverage and new products.

There has been at least one noticeable change since the sale: an outpouring of coverage of Alibaba and its leader, Jack Ma, one of China’s richest men. Articles mentioning Alibaba reached an average of about 3.5 per day last year online and in print, roughly double the number in 2016, according to an archival search.

Alibaba appears to be willing to lose money on The Post, which is not profitable, according to newsroom leaders. Mr. Tsai has said The Post, with a circulation of about 101,000 and more than 10 million monthly active users on its website, may not become a self-sustaining business for at least five more years.

Traffic to The Post’s website has roughly tripled over the past year, the company said. Alibaba made access free when it took over.

But Alibaba has abandoned ambitions of expanding the audience for the Post’s journalism in the mainland, where its website is blocked. Even with its pro-China mission, articles in The Post still touch on topics that are off limits to mainland readers, like the 1989 Tiananmen massacre.

While many of its approximately 850 articles a week appear tailored for a Hong Kong or Asian audience, The Post has gone on a hiring spree of journalists from outlets like BBC and The New York Times to help bring an international tone to its coverage.

To cater to young people and readers in the United States, now its largest market, the Post this month launched Inkstone, an app and newsletter that offers a conversational take on China, and Abacus, a multimedia site focused on technology. The new products also help blunt criticism that The Post is a propaganda tool.

“Diss the national anthem? That’s up to three years in the slammer,” read one recent headline on an Inkstone article about penalties for mocking the Chinese national anthem in Hong Kong.

The Post’s success may hinge on persuading overseas readers that it delivers reliable journalism about China. But on the front lines, reporters are grappling with perceptions that the paper is another Chinese state news media outlet.

“No matter how good their output,” he said, “there will always be distrust.”

Robert Delaney, a New York-based correspondent for The Post, said he had difficulty lining up interviews with American politicians and other sources because they assumed he worked for a news outlet controlled by the Communist Party.

“Within the first minute, I just want to let them know, ‘Just so you know, we’re not a mainland Chinese newspaper, even though we have China in our name,’” he said. “That gets kind of awkward.”

A version of this article appears in print on April 1, 2018, on Page A8 of the New York edition with the headline: Newspaper’s New Goal: Change How the West Sees China. Order Reprints| Today's Paper|Subscribe