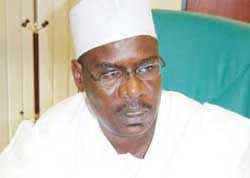 Senator Aliyu Ndume, who is facing trial for allegedly sponsoring the Boko Haram sect, got a reprieve on Tuesday as the Court of Appeal, Abuja Division, overturned the admission in evidence of records of mobile telephone conversations between him and a former spokesman of the terror sect, Ali Konduga (aka Al Zawahiri).

Trial judge, Justice Gabriel Kolawole of the Abuja Federal High Court, had in two rulings on December 11 and 14, 2012, admitted in evidence, DVDs containing results of the forensic analysis of two mobile telephones said to be retrieved from Ndume and Konduga – including call data records – as exhibits P7, P8, P8a and P8b.

The DVDs were tendered in court by the State Security Service.

Following the development, Ndume, through his lawyer, Rickey Terfa, SAN, approached the Court of Appeal to challenge the admission of the DVDs.

Ruling on the application on Tuesday, the panel of justices of the Court of Appeal upheld the two appeals filed by Ndume.

In a judgment read by Justice Amiru Sanusi, the appellate court faulted the admission of the materials in evidence by the Abuja FHC.

The Court of Appeal held that the Abuja FHC erred when it admitted the DVDs in evidence even when the prosecution failed to comply with the condition precedent as required under Section 84(1) and (2) of the Evidence Act 2011 (as amended) in relation to the admission of computer generated evidence.

According to the appellate court, the word “shall” in section 84 of the Evidence Act made it compulsory that its provisions must be complied with.

“In this case, the respondent failed to comply with the condition precedent as prescribed in Section 84 (2) of the Evidence Act,” Justice Sanusi stated.

The court, as a result, declared as wrongful, the admission in evidence of the DVDs marked exhibits ‘P7, P8, P8a and P8b’, which contained the records of mobile telephone exchanges between Ndume and Konduga.

The call data records had revealed a total of 73 mobile telephone conversations between Ndume and Konduga from October 3, 2011 to November 3, 2011.

A forensic examiner attached to the Special Investigation Unit of the SSS, Mr. Aliyu Usman, had made the disclosure while testifying before the Abuja FHC.

Disclosing details of the DVDs, the witness also informed the court how Ndume and Konduga saved each other’s numbers on their mobile telephones.

While Ndume’s number was saved on entry 78 on Konduga’s mobile telephone as ‘INDUME Sen. Ali.’, the former Boko Haram spokesman’s phone number was stored on entry 1819 on the Senator’s mobile phone as ‘Mal. Ali. BH’

The call data records were obtained after a forensic analysis of a Nokia E7 phone said to belong to Ndume, and a Nokia 2700 belonging to Konduga.

Ndume was arraigned before the Abuja FHC on a four-count charge bordering on terrorism after he was implicated by Konduga, who was eventually convicted and sentenced for his role in the terrorist activities of the Boko Haram sect.