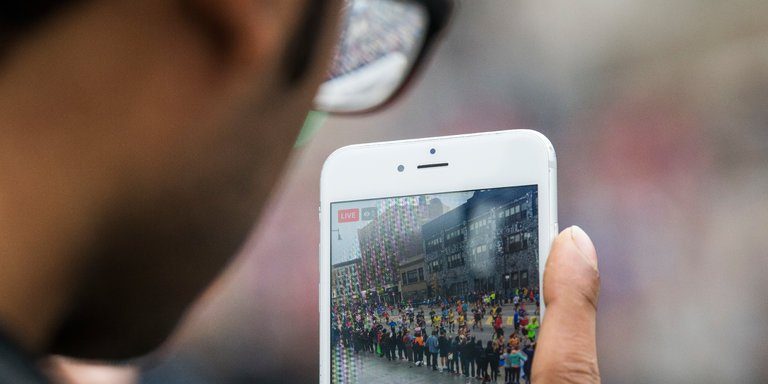 Not long ago, a filmmaker wouldn’t dream of shooting a movie on a phone because the quality was so inferior to what you could capture on pricier devices. But that’s changing. Consider this: The most recent project from the renowned American film director Steven Soderbergh, “Unsane,” was shot entirely on an iPhone.

Today, there are lots of reasons everyone from pro photographers to amateur shutterbugs are using phones to shoot video projects.

Like many of his peers, Christian Nachtrieb, a Boston-based corporate and wedding photographer, finds phones aren’t just continuing to improve in terms of quality, but they’re also extremely convenient. “It’s the readiness factor. Having a phone right in your pocket is a huge plus,” says Mr. Nachtrieb, who might see a stunning sunset, capture it on his phone, and then splice it into a final wedding video. “No one in a million years could tell the difference between our main cameras and the iPhone.”

What makes a good video good?

What do such improvements in video quality allow you to capture? In theory, a good video. But that can mean many things: Good on a technical level? Or, perhaps, a clip that’s simply fun to watch? First, let’s explore some of the basic elements that make up good video.

Technical excellence in a good video can be pretty easy to spot: we see examples of it all the time on television. During the 2018 Olympics, for instance, you could watch skilled videographers shoot breathtaking videos of athletes in spectacular settings. From a technical standpoint, here are some common elements in those and other types of video that you can apply to video captured on your phone.

Composition: To create compelling video, compose the elements in a scene or sequence deliberately. Use your phone’s LCD the way a fine-art painter might arrange forms, colors, lines and textures on canvas. (For more on composition, visit Kyle Cassidy’s article on Videomaker.com, which offers a wonderful introduction to composition and compositional devices, like the rule of thirds, as well as valuable tips, such as focusing on people’s eyes in your video.)

Lighting: Light not only defines your subjects but also sets the mood or evokes emotion. Experiment with light and be aware of where your main light source is. For instance, noon sunlight on a cloudless day creates unflattering shadows on your subject’s face, while an overcast or cloudy day produces a softer, more pleasant-looking light. And remember what the legendary film director Martin Scorsese once noted: “Light is at the core of who we are and how we understand ourselves.”

Point of view: Ask yourself “Where am I pointing my camera lens and from what angle?” Consider point of view figuratively, as well: “How will the video’s point of view help me tell the story?” Some videos are like selfies and use a very subjective point of view to connect viewers to the story. For other videos you might want a more detached, less personal point of view. And when shooting small children or babies, get right down on the floor to shoot.

A video can resonate for reasons other than exquisite technique. The subject might be funny, or the story simply thrilling, sad, or even chaotic. Sometimes, a powerful video, though technically flawed, still draws us in by other means. Two film sequences come to my mind that illustrate this point.

The first, the apology scene from “The Blair Witch Project,” presents a visually awkward composition, in which the subject’s face is dramatically cropped. Also, the lighting and audio are lousy. Yet, the monologue, a horror-film soliloquy of sorts, conveys intensity, mystery and a baroque quality. You can almost feel the presence of a dark force outside the visual frame.

In the second sequence, the “I just wanna go the distance” sequence from the movie “Rocky” (2:00 in the video clip), the video subtly elevates an ordinary moment of doubt. It’s an exceptionally quiet moment, where Sylvester Stallone, as Rocky, lays down next to Talia Shire, as Adrian, telling her he can’t beat the champ. For nearly two minutes, the camera slowly pans in as the fighter utters his thoughts. What transfixes us is primarily the audio, since there’s little action. Yet it’s visual, too. I can’t help thinking of it as an updated version of the intensity and pathos you see in the ancient Greek sculpture, “Dying Gaul.”

So, good video obviously operates on a very visual level, but it can be driven in nonvisual ways, too. Keep your eyes open for such opportunities.

Start with the right settings

Before taking video on your phone, set it up properly. One important setting is video resolution, which refers to how large your movie will be. Two common resolutions are 1080 HD and 4K, which is the larger of the two.

Next, check the frame rate, which sets how many individual frames per second (fps) your video records. Common settings are 30 fps, 60 fps, and less commonly, 24 fps. The higher the number, the smoother-looking video you’ll produce. Most video is shot at 30 fps or 29.97 fps (in the United States), although 60 fps will show smoother, less jittery video when depicting action. But some videographers, like Mr. Nachtrieb, prefer filming in 24 fps, which mimics the frame rate used in cinema films.

Each of these two settings affects some visual or audio component of your project. They also can determine the final file size of the video. For instance, a five-second video shot at 4K-resolution will be roughly four times the size of the same segment shot in 1080 HD resolution. “When it comes to resolution,” says Mr. Nachtrieb, “it’s always going to be a compromise between your storage capacity on your phone and the quality resolution you want. I try to shoot 4K whenever possible.”

An Easy, but Important Tip: Clean Your Lens Mr. Nachtrieb recalls how he and a friend were shooting the same subject one day, but his friend’s lens was dirty, which produced blurry video. “Make sure your lens is clear. If it’s not, carefully clean it with a microfiber cloth.”

How to improve your video quality

Shooting video on a phone isn’t the most intuitive experience. That’s because phones were designed as multipurpose devices, which also means they lack some important features, like a handgrip or optical zoom, which gets you closer to your subject without degrading image quality. (Instead, phones mostly use digital zoom, which often degrades image quality. So, avoid zooming in digitally. Instead, “zoom with your feet” or simply walk closer to your subject, if you can.) Here are several tips for getting better results.

1. Orientation: Be sure to orient your phone horizontally. “When I’m watching the news and there’s footage from a bystander that’s in portrait mode,” says Mr. Nachtrieb, “that’s an immediate signal that it’s an amateur video.” He says that while Instagram and Snapchat seem to be “aiding and abetting” users to create more portrait- or vertically-oriented footage, it’s best to avoid it.

2 Avoid Back Lighting: “Avoid having a window or light source behind your subject, since he or she will look silhouetted,” says Mr. Nachtrieb. Instead, have the light source more to the side of you or behind you.

3. Use both hands: “Always have two hands on the phone,” says Mr. Nachtrieb. “It may seem rudimentary, but it makes a big difference. Phone lenses generally have optical image stabilization built in, so they’re pretty stable already. But using two hands produces even steadier footage.” It also avoids what he calls the Jell-O effect. “If you’re moving the camera around too quickly, it can have a wavy quality to it.” Using two hands lessens the chance of creating this effect.

4. Lock Focus and Exposure: Mr. Nachtrieb suggests tapping on your phone’s LCD (on the point you want to focus on) which will lock focus on Google Android devices, or holding your finger in place, which locks focus on the Apple iPhone.“In low light, your phone’s camera will hunt for focus.” That makes it look less professional. Most phones let you also lock or manually adjust the exposure, too.

5. Improve Your Audio, Too: Most video pros say good quality audio is essential for powerful video. The good news is that the microphones on smartphones have improved in recent years. What’s more is that audio accessories, such as Bluetooth microphones, can make the audio in your video projects sound outstanding (which we’ll get to in a moment).

Here are two audio tricks: Borrow a second phone, start recording audio, and place the phone in your subject’s pocket. “Then, shoot video on your phone from far away,” says Mr. Nachtrieb. “You can always sync up the audio tracks later in video editing.” And when interviewing subjects, don’t interrupt their replies, says Mr. Nachtrieb.

6. Try Slow Mo and Time Lapse Effects: Many smartphones come with some powerful video features, including modes that appear to slow down or speed up time, which are more commonly known as slow motion and time lapse. The former captures video at an accelerated frame rate; When played back at normal speed, action in the video appears much slower than real time. With time lapse, a lower frame rate is used. When it’s played back at normal speed, action moves much faster than in real time. Both can produce compelling video.

Add accessories, or step up to a stand-alone camera

If you’re not happy with the hardware features on your phone, there are accessories to expand its capability and, in some cases, the quality of your video, particularly if you’re interested in Vlogging.

Here are a few products to consider, courtesy of our colleagues at Wirecutter, The New York Times Company’s product review site:

Wirecutter testers like the Moment Wide-angle lens, $100. The lens attaches over a phone’s camera lens to give you a wider shot without drastically degrading image quality.

■ USB Mics: The Shure MV5, $99, is a great microphone for use with a smartphone.

A stand-alone camera can really improve your video. When you’re ready to shoot with something other than your phone, here are some models that earned top ratings from Wirecutter:

The Sony a5100 is the best entry-level mirrorless camera, $500, and the Canon EOS Rebel T5i is the best entry-level DSLR. Mirrorless cameras blend portability with powerful picture-taking sensors, while DSLRs are unmatched when it comes to photo quality — but are larger, bulkier, and more expensive. Both types allow you to switch lenses depending on what — or where — you’re taking photos.

■ Advanced Bridge Point-and-Shoot: For something between a mirrorless and a portable point and shoot, check out the Sony RX100 Mark IV, $900.

■ Waterproof-and-Rugged Camera: Want something that can travel with you and take a few bumps and drops? Try the Olympus TG-5, $420.

Terry Sullivan is a journalist who covers consumer electronics, technology services and their intersection with the visual arts. Follow him on Twitter @TerryCR and Instagram @terrycr64.