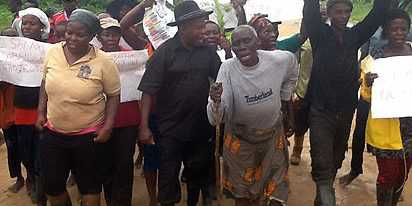 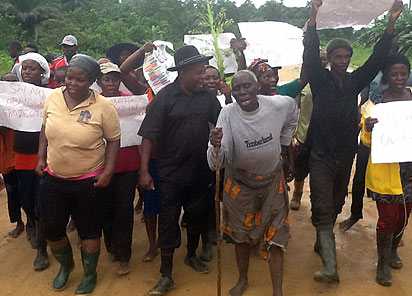 led by a 90-year- old woman, Madam Omiekumo Numo, yesterday, protested against the abandonment of the Opume-Okoroba Road project by the Federal Government.

The 10 km road project, which is to link the coastal town of Okoroba to mainland Ogbia Local Government Area, was awarded in 2011 to Mangrovtech, now known as Kakatar’ce by Niger Delta Development Commission, NDDC.

The project, it was learnt, was abandoned on the grounds of alleged disagreement over compensation and non- availability of sand.
The aggrieved indigenes of the community, who braved the swampy stretch of the road to stage a peaceful protest some distance away from the Opume Junction, however, noted that the decision of NDDC to award the project to the construction firm, owned by an indigene of Ogbia, was laudable.

Armed with placards, some of which read: “EFFC: Probe payment of Compensation,” “NDDC save Our Soul,” “We say No to delay,” “Enough is Enough: Give us back our road,”  “Sand is not an excuse,” among others, the aggrieved indigenes led by Madam Omiekuma Numo, said they were compelled to spend about three hours trekking through the swampy road which ordinarily they would have spent less than 15 minutes on, if the work had been completed.

According to the nonagenarian, “Our people are suffering and my children have abandoned me in the village due to the bad road. I am hungry and I woke up since 5a.m., to join the three hours protest march through the muddy water on the abandoned road to show you how serious and pained we are as a people.”