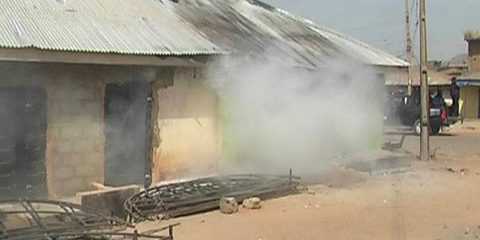 The Red Cross yesterday said in Wukari, Taraba State that about 77 people lost their lives during the crises between some Fulani herdsmen and the indigenous people of the area few days ago.
This was even as the police said that the death toll from Wukari crisis had risen to 24.

The Police Public Relations Officer, ASP Joseph Kwaji made this known in an interview with newsmen yesterday also in Wukari. He said 34 persons were injured while 99 houses were burnt during the crisis.
District Leader of the Red Cross in the area, Saidu Aji who spoke on the issue said that about 37 people were

buried as soon as they were killed while 47 others were confirmed dead at various hospitals.

Aji further said that 40 people were receiving treatment for various degrees of injuries sustained during the mayhem, pointing out that the number of the victims were still being collated. According to him, 14 victims were taken to Kwararafa Hospital in the town while those with serious cases were taken to the Jalingo Specialist Hospital.

Traditional Ruler of Wukari, (Aku Uka), His Royal Highness Shakarau Angyu who briefed the state’s Acting Governor, Alhaji Garba Umar, yesterday, blamed the Fulani for igniting the crises.
He urged Umar to review the 24-hour curfew imposed on the town so that people could go out and buy food or attend to some of their needs outside their houses.

Umar has however, said the curfew would continue till the security agencies were satisfied with improvement in the security situation.

“In my opinion, it is not yet time to relax the curfew imposed on Wukari because the youth are still very angry.
“Even this morning, a house was burnt close to a security check point in Wukari town,” the Acting Governor said, and asked parents to call their children to order.

Umar also promised to send a delegation to the government of Benue State in a bid to find solution to the incessant clashes between the Fulani and their neighbours in Taraba State.