7 Young People on Their Views of Gender 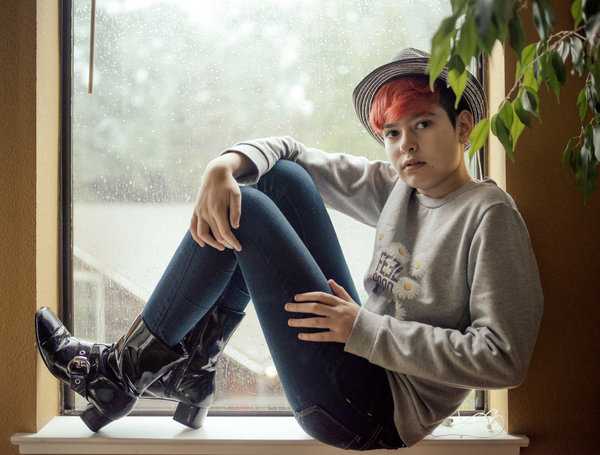 7 Young People on Their Views of Gender

About two years ago, I began photographing transgender and “gender-expansive” children and young adults in the United States and Europe. I wanted to ask this question: “Who are we beyond ideas tied to our gender?” The answer is critical not only to the transgender community, I believe, but to everyone.

In the younger participants, I have found self-assuredness and confidence; they are clear about who they are. In the older youths — especially the nonbinary ones who identify as both genders, or neither — I see a willingness to break free from boxes society puts us into. In all of them, there is creativity and compassion for peers and strangers alike.

Below are some pictures and brief thoughts that a few participants have shared with me, condensed for clarity and space.

“I asked my mom if I could text her something. I texted her that I am attracted to boys and that I feel more girl than boy. Later that year, I found the term nonbinary. It just felt right. I still am often scared of the reactions of people when I tell them.

“As a trans person who has experienced hate, I want people to understand that nobody deserves to be hated. Everyone deserves love, regardless of race, gender, sexuality.”

“It is really different living as myself. Before, I felt like I was always trying to squeeze into jeans that were six sizes too small, but now it feels like I am in jeans that were made just for me. I no longer wake up hating myself or this world that does not understand me.

“I want to make sure the world does not take as long as it did to be open to gay and bi people. I hope that I am able to help girls like me, so they don’t go through what I did. I want to slay the gods 100 times over doing things that trans girls have never done. I want to be the face of equality.”

“After coming out, I had huge dysphoria and struggled hugely leaving the house and speaking when I was out in public. There were moments when I would feel like I was doing the right thing and moments I thought I was going crazy. Gradually over time I started to feel the benefits of being truthful to myself.

“Living in a body that you feel doesn’t fully belong to you yet is extremely painful, but dealing with people who think you are disgusting and sick is mentally draining….I understand that my gender does not define me or who I am. I refuse to let gender roles and female-male privilege control me.

“I am perfectly imperfect. And proud.”

“When I was 12, I realized that transgender was a thing. It made sense. I’m straight — I’m a straight guy in a girl’s body.

“I had very distorted expectations, though, and thought that I would be able to have hormones and operations straightaway. The process is too long. I hate looking like this, I hate the body that I have. I want it to transform, and it is wrong that I have to wait until I’m an adult.”

“At the end of the day, people can say what they want about you, but the only voice that matters to you is yours. They just don’t struggle with the things we struggle with.”

“I feel most comfortable in the space between the gender binary, a space where I’m allowed to construct my own ideas of gender and gender expression. That means I feel more masculine than feminine. For many, this is a hard concept to understand.

“Being nonbinary also means I will never truly be accepted by society. It means that when a stranger asks me, ‘Are you a boy or a girl?,’ I have to evaluate which option will keep me safest.” — Kyla, left

“Gender still baffles me, and I didn’t grow up seeing it the way others do. I can’t say I now understand gender on a personal level, but I have a better understanding of it on a societal and institutional level. Trans identities expose the underpinnings of gender in ways that our society often deems as dangerous.

“We are complex individuals living in a complex, multidimensional world. It doesn’t make sense for gender to be any different.” — Mya