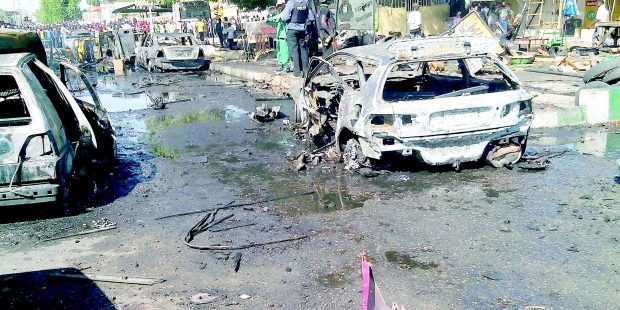 Yesterday was another day of tragedy in Adamawa State as unknown  gunmen reportedly killed six persons and razed 39 houses in Masu village  in Toungo Local Government Area. An impeccable source from Toungo  disclosed that the attackers were suspected mercenaries hired by Fulani  herdsmen who had problems with the villagers who are predominantly  farmers.
“The attackers outrageously came into the town and attacked innocent  persons. This problem started about three months ago when herdsmen  entered a local farm and the villagers called an army patrol team who  arrested and subjected them to serious drill and beating.”
“The development angered the Fulani community in the area who decided to  call on all their members to boycott the cattle market in protest,”  Aliyu said.
The source further said that was the climax of the tension that led to  gunmen attacking the village on Friday morning, leading to the killing  of four villagers with many others injured and now receiving treatment  at Toungo cottage hospital.
A resident who simply identified himself as Aliyu, said, two of the  suspected attackers were killed by security agents while trying to  escape bringing the death toll to six, “39 houses were also razed by the  attackers,” he said.
As at press time, efforts to get the police and army to comment on the incident proved abortive.
From DAVID MOLOMO, Yola