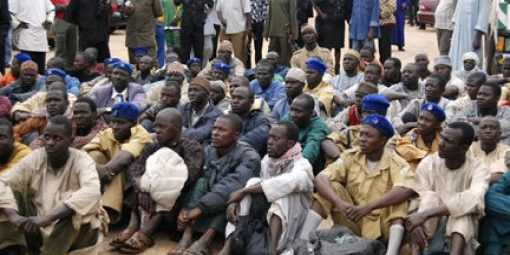 The suspects were reportedly heading to different parts of South-East and South-South zones of Nigeria but this could not be confirmed.

A team of national task force on small arms, ammunitions, and light weapons apprehended them in the early hours of today.

But when our reporter visited the state police headquarters this morning, the suspects were seen filing out of the intercepted bus with registration number, AKD816XG into the premises of the command.

It was learnt that the vehicle, belonging to a transport company (name withheld), was impounded during a stop and check exercise by the security men.

Asked to confirm the arrest of the suspects, the state Commissioner of Police, Mohammed Adamu Abubakar, who had previously paraded four criminals, nabbed for car snatching, declined comment, saying he was yet to get detailed information on the incident.

He said that he has ordered the task force team to transfer the suspects to the police headquarters in Enugu.

Items recovered from the alleged insurgents include arms and bags of Army uniforms, amongst others.

The arrest comes less than two weeks after 486 Boko Haram suspects were arrested on June 15 in Abia State by the military. The suspects are still being screened by the relevant security agencies.