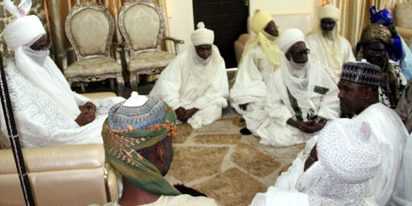 FORTY-eight hours after his appointment as new Emir of Kano, Alhaji Sanusi Lamido Sanusi is yet to resume duties at the Emir’s palace, located in Nassarawa in accordance with tradition.

The appointment of the new Emir was announced by the Secretary to the Kano State Government, Rabiu Suleiman Bichi last Sunday and was subsequently issued appointment letter and staff of office by Governor Rabiu Musa Kwankwaso the following day.

Alhaji Sanusi, the 14th Fulani emir, and the 57th Emir of Kano, resumed traditional functions at the Government House, holding court and receiving guests and well wishers in the fortified seat of Government.
Vanguard learnt that traditionally, the new emir resumes duties at the Nasarawa palace resort as part of the ritual of ascendancy, before proceeding to the official palace of the Emir tucked inside the old city.

Vanguard learnt that the traditional insignia were those used by the 2nd Fulani Emir of Kano, Ibrahim Dabo, who was an associate and brother to the founder of Sokoto caliphate, Alhaji Usman Dan Fodio in 1804.

Vanguard also learnt that yesterday’s historic hand over of symbol of authority to the new emir, signified a new beginning in the emirate’s history as plans are afoot to relocate him to the Emir Guest Palace located not far from the Government House.

Meanwhile, the Police still kept vigil at the centuries-old Palace in the city, and it was not certain when they would vacate the palace.

Speculations are however rife in the city that President Goodluck Ebele Jonathan is due in Kano to condole with the families of the late emir, Alhaji Ado Bayero.

Air Force helicopters were seen hovering the skyline of Kano metropolis, while Armoured Personnel Carriers were stationed in strategic locations.

Meanwhile, normalcy has returned to the streets of Kano after two days of violent protests greeted the announcement of Alhaji Sanusi Lamido Sanusi as emir.

Schools were re-opened to students; business activities commenced in all the major markets in the city, as motorists and commuters moved freely in the city without molestation.

Police had on Monday successfully dislodged protesters in front of the Emir’s palace located along Emir Palace Road.

Residents that spoke to Vanguard on the development argued that “the city deserves peace, especially now that it was clear that Sanusi’s appointment cannot be reversed”.

A kolanut hawker in the city, Malam Naroun told Vanguard that “people have expressed their anger, and those in position of authority have had their way, so life must go on.”

He added that “from what I know of Kano, the city cannot sustain an enduring protest because most of us live from hand to mouth and government knows this weakness too well”.

However, Police image maker in Kano, ASP Magaji Musa Majia appealed to parents and guardians to caution their wards over illegal assembly, adding that “the city is calm and quiet as we have no record of security breach today”.