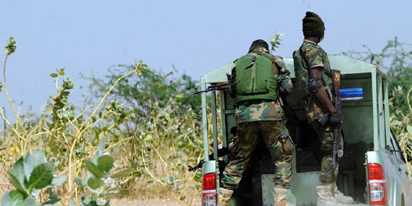 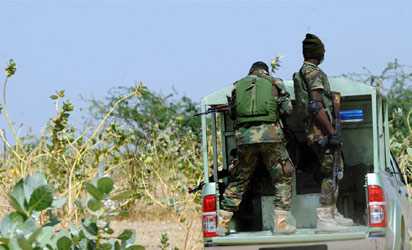 No fewer  than 45 suspected members of Boko Haram sect have been killed in an encounter with military troops when the terrorists in their large number attempted to invade and take over Bama Local Government Area of Borno state.
Also, over 30 of the insurgents were injured with minor injuries sustained  during the fierce battle with the security operatives that lasted over five hours.
The incident according to sources started in the early hours of Monday morning at about 5:30am.

This is even as an unconfirmed report revealed that another group of the insurgents were sighted on Monday around Mafa Local Government Area and Kayamula villages of Konduga Local Government Area near Maiduguri metropolis, but those sighted around Kayamula village were killed by military troops, while those around Mafa were suspected to be making frantic effort to enter the metropolis.
This development according to sources was responsible for the review of the curfew in the metropolis from 6a.m. to
7p.m. as against 9pm earlier imposed on the state which is under emergency rule, according to the spokesman of the 7 Division Nigerian Army,  Colonel Sank Usman Bama is about 76 kilometres drive and south east of Maiduguri, the state capital which had witnessed series of deadly attacks by suspected terrorists.
A competent source said, “the insurgents stormed the town through Bama-Banki-Gwoza Road but were intercepted by gallant military troops near the Bama Mobile Police Unit located about five kilometers away from Bama town.
The Boko Haram insurgents were said to have attempted to enter Bama town  in military uniform armed with sophisticated weapons and local Improved Explosive Devices (IEDs) and in a convoy of military vehicles and motorcycles.
The battle where gun shots and sounds of Rocket Propelled Grenades (RPGs) as well as bomb explosions took the centre stage had sent hundreds of residents including some prominent traditional rulers (name withheld) fleeing the town through the bush and some by road or vehicles to neighbouring villages including Maiduguri and Konduga towns.
A resident of Bama, one Mallam Abba Usman who fled to Maiduguri on Monday morning told our Correspondent that “there was an attempt by the Boko Baram sect to enter Bama town or capture Bama as they did in Gwoza some weeks back, but thank God for the good efforts of the military troops stationed near the mobile police unit who repelled the attack in a joint effort with their colleagues from the 21 Brigade of the Nigerian Army who gallantly succeeded in repelling the attack killing about 45 of the insurgents and wounded over 30.”
He added that “the situation actually scared  many of our people and even forced some of us to run to Maiduguri town for safety while some I learnt are in Konduga as some are said to be in the rural villages hiding”.
Another resident of Bama, Alhaji Masa Bukar who fled to Maiduguri and is presently at a refugee camp at Konduga motor park along Bama road oppositeUuniversity of Maiduguri  said, “we are  here because we woke up this morning during the subh prayer hearing gunshots and RPGs shots around the Bama Technical College and mobile police unit Bama along Banki road. We were advised to even leave the town by the military and civilian JTF.
They asked us to leave Bama to give them  the chance to fully fight the Boko Haram people. So we have to leave.  Some of us had to stop over along the way, taking refuge in Kawuri, Goniri and Konduga, but we decided to come to Maiduguri   where there is heavy military presence.
We are afraid  and scared. Our people are still coming out  from Bama.  Although few hours ago, we saw military reinforcement moving towards the Bama town from Maiduguri. Many military vehicles and armoured cars have passed to Bama this morning to join their colleagues in the fight against the Boko haram insurgents.”
Source vanguard