44 massacred in a Borno mosque, another 12 killed in Mafa as Northern sponsors of Boko Haram begin soul searching 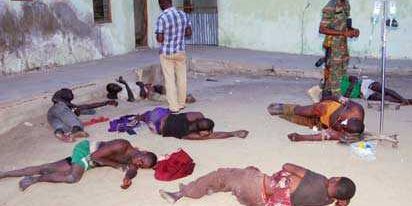 About 44 people praying at a mosque in Konduga town, some 22 miles outside Maiduguri, Borno state, have been gunned down by suspected Islamic militants, security agents said.
A Department of State Service, DSS, agent and a member of a civilian vigilante group working with the military said, yesterday, they counted the bodies at the mosque after last Sunday morning’s attack.

Also yesterday, embattled leader of the Boko Haram sect, Abubakar Shekau made a video appearance and claimed series of recent deadly attacks on security forces in the North-East. Shekau also insisted that he was in “good health” despite an on-going military offensive aimed at crushing the Islamist insurgent group he heads.

A handout picture released by the Nigerian army showing Multinational Joint Task Force (MNJTF) medical officers treating civilians injured by suspected members of the Boko Haram Islamist sect in the village of Dawashe, in the Kukawa district of the state of Borno.

He also challenged US President, Barack Obama; Israeli Prime Minister Benjamin Netanyahu and French leader, Francois Hollande, saying they were not his match.
“You have not killed Shekau,” he said in the video distributed through a local intermediary in a manner similar to previous Boko Haram messages.

On the massacred 44, the DSS agent spoke on condition of anonymity because he was not authorized to talk to reporters. But agency reports quoted one Usman Musa of the civilian group as saying that four of its vigilantes were also killed when they responded to calls for help.

Another report said 12 people were killed in Ngom of Mafa Local Government Area of the state between Saturday and early Sunday morning. The armed men, suspected to be members of the Boko Haram sect reportedly invaded the two council areas during the Muslim Asba prayers.

Residents who fled to Maiduguri, the Borno State capital, yesterday for safety, disclosed that the gunmen killed an unspecified number of people. A source from the University of Maiduguri Teaching Hospital (UMTH) said they received 26 victims of the attacks who are currently receiving treatment in the hospital.

Also a member representing Konduga at the state house of assembly, Ali Bukar Dalori told newsmen at Government House, Maiduguri that he received news of attacks on members of his constituency with shock. He said although he did not know the casualty figure, he was informed that many people lost their lives and some who were injured were brought to UMTH for treatment.

In the Shekau video, seated on a short stool with a Kalashnikov rested on his right shoulder, the Islamic sect’s boss said Boko Haram was “responsible” for several deadly raids over the past months.

These include attacks on the police and military in the towns of Malam Fatori and Bama, which sparked clashes that killed at least 35 people, according to the military.
The video contained what Shekau claimed was footage of Boko Haram gunmen opening fire on the military in Bama, using heavy weapons mounted on flat-bed trucks.

Shekau also referred to fighting in the towns of Baga and Gamboru Ngala near the border with Cameroon.
The Boko Haram leader has been declared a global terrorist by the United States, which in March put a $7 million (5.3 million euros) bounty on his head.

“I’m challenging Obama,” Shekau said in the video. He voiced similar challenges to French President Francois Hollande and Israeli Prime Minister Benjamin Netanyahu.”They are no match for me,” he proclaimed.