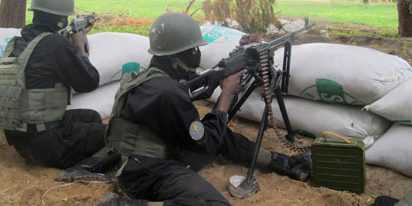 Cameroon’s military has arrested 40 suspected Boko Haram militants in the north of the country.   Soldiers have also sealed off a market where they suspect Boko Haram may be hiding arms for use in the insurgency over the border in Nigeria.

“A gendarme [military] raid on the Maroua Central Market has led to the arrests of over 40 people,” a state radio broadcaster announced. “The arrests are in connection with ongoing investigations into the activities of the Boko Haram group in the far north region of the country.”

In an interview with the private Danay FM radio station, Maroua businessman Wanika Baba, said many of the arrested were his peers and there is confusion in the community.

He added that he does not understand what is happening as the military has had the market sealed for two days now and have arrested so many people. He said children and women are suffering from the closure and no one knows the fate of those arrested.

Colonel Nyemeck Pierre, who led the military raid, told VOA that the central government ordered the military action as part of its fight against Boko Haram incursions into Cameroon.

“It is the duty of the military to filter the population so that enemies do not infiltrate into Cameroon,” he said in French, adding that the matter is complicated because along the border there are Nigerians and Cameroonians who belong to the same families and soldiers have to try to distinguish who is a militant.

This is the first time Cameroon’s military has carried out an operation on such a large scale in a single day.

Northern Cameroon has been plagued for almost a year with an influx of refugees and militants from strife in neighboring Central African Republic and the Boko Haram violence in northern Nigeria.

Authorities in Cameroon have been urging citizens along the border – particularly with Nigeria’s Borno State – the heart of the Boko Haram insurgency – to cooperate with the government by providing information on suspected sympathisers with the Islamist sect.

The government here believes Boko Haram is now expanding its recruiting into Cameroon.