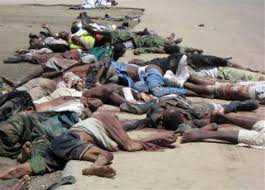 Life in the Zoological Republic of Nigeria

The death toll of policemen killed by members of the Ombatse cult in Nasarawa State has climbed to 72 following the discovery of the bodies of 25 policemen that had been hitherto declared missing in a mass grave in an unnamed village in the state.

Security authorities had earlier confirmed 57 operatives, comprising 47 policemen and 10 agents of the State Security Service (SSS), killed in the attack that took place on May 7 when they were on a rescue mission to a village in Nasarawa State.

The police, which launched a manhunt for the killers, had declared the 25 policemen missing because their bodies could not be found to confirm if they were dead or alive and nobody knew their whereabouts.

The manhunt for the killers however yielded fruit yesterday as seven of the suspected Ombatse cultists were said to have been arrested in Borno State while trying to flee to Niger Republic.

While the police are still searching for the killers, the Chairman of the Northern State Governors’ Forum (NSGF) and Niger State Governor, Dr. Babangida Aliyu, yesterday called on the federal government to fish out the killers and bring them to justice.

A top police source confided in THISDAY yesterday that contrary to the hope among the police authorities that the 25 policemen might still be alive, their bodies were recently found in a mass grave in a village. But he declined to name the village and when the bodies were discovered.

“By the time we found the missing policemen, their bodies were already decomposing in a mass grave in the village. It was a gory sight,” he said.

He promised that the police would spare no efforts and resources in ensuring that those behind the killings are found and prosecuted.

Efforts to get more details from police spokesperson, Frank Mba, a Chief Superintendent of Police (CSP), proved abortive, as he did not pick or return his calls. It was also learnt yesterday that seven of the suspected killers of the security agents have been arrested in Borno State while trying to flee to Niger Republic.

The arrest has however not eased tension in the state as many people feared that the case will not be closed until the arrest of the chief priest of the Ombatse shrine whose concoction people believed helped the cultists to become invulnerable to injuries from weapons.

It was learnt that the fear stems from the fact that the power and influence of the chief priest is known to the people, especially politicians who had also benefited from his mystical powers in 2011 during the general election.
The cult, according to a source, is said to be bitter that those who climbed to positions of power through its influence turned round to send enforcement operatives to destroy it.
The seven suspected Eggon militants believed to have been apprehended at the weekend by the Joint Task Force (JTF) operatives in Borno State may have been handed over to the Nasarawa Police Command.
Initial investigations have also shown that some top politicians in the state had patronised the shrine during the campaign for the last general election and helped in the funding and provision of logistics, especially sophisticated weapons used by the cultists.
Inspector General of Police (IG), Mohammed Abubakar, while visiting the troubled area at the weekend, had called on elders and eminent citizens of Nasarawa State to collaborate with the police to fish out the killers.
The IG, who was in the state along with the Minister of Police Affairs, Navy Captain Caleb Olubolade (rtd), described the killing of the security agents as “callous”.
He said some officers were still being held hostage by the militants, adding that efforts were being made to free them. “We are making every peaceful effort to ensure that some of our men still being held hostage are released unhurt,” Abubakar said.
On his part, Olubolade said such a “barbaric act” of snuffing out the life of security personnel, who are meant to safeguard lives, was unacceptable in a decent society.
“Somebody, somewhere is causing havoc for whatever reason and the society must not allow that to continue,” he added.
The Niger State governor also Monday made a case for the apprehension and prosecution of those behind the killing of the security agents in Nasarawa State.

Aliyu, who spoke in Abuja during a peace forum and launch of polio eradication almanac, which was organised by the Northern State Governors’ Wives’ Forum (NGWF), also called for equal compensation to families of security agents killed in Nasarawa State.

Over N70 million was raised to encourage the peace mission and polio eradication in the region. The governor said it was deplorable that security agents who are symbols of the nation’s authority could be killed by insurgents.

“I heard that a policeman’s life is worth N500,000 and that it took the intervention of the Force Headquarters to make it N1 million, while that of the SSS is N10 million and a house. We should begin to treat our security agents equally,” he said.

Chairperson of NGWF and wife of Benue State governor, Mrs. Yemisi Suswam, said the peace forum would allow for open and fair interaction and exchange of ideas on the peaceful co-existence of the nation.