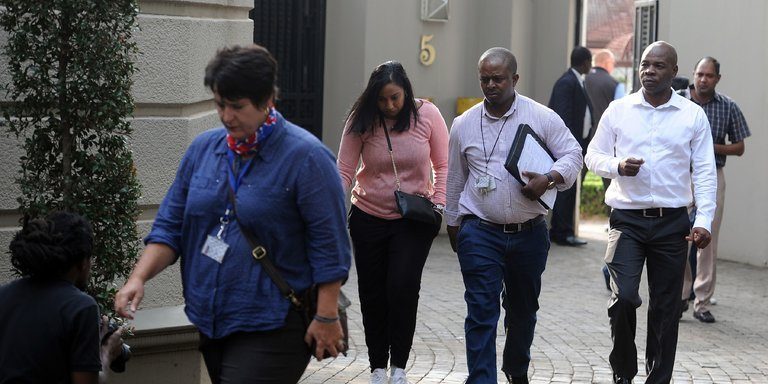 JOHANNESBURG — Law enforcement officials raided the compound of a family close to former President Jacob Zuma of South Africa on Monday as part of an investigation into corruption at a government dairy farm project.

Accompanied by the news media, about 20 officials seized assets totaling about $21 million at the Johannesburg residence of the Guptas, three Indian brothers who built a business empire through their ties to Mr. Zuma, his family and political allies.

National prosecutors said the assets belonged to “several individuals and entities who were implicated in the offenses of theft, fraud and money laundering” in an investigation into a dairy farm project in Vrede, a farming town in the province of Free State. The assets — including aircraft, a helicopter, vehicles and bank accounts — have been frozen pending the outcome of a criminal trial, prosecutors said.

The dairy farm has become the first high-profile case of public corruption from the Zuma presidency to lead to arrests and charges. About $21 million in public funds, meant to help struggling black farmers in Vrede, disappeared in the government-backed dairy project, which was managed by a longtime business associate of the Guptas.

Money from the project found its way into the bank accounts of politically connected individuals and companies, including one of the Gupta brothers, Atul, according to prosecutors. The project was backed by two high-ranking African National Congress politicians close to the Guptas: Mosebenzi Joseph Zwane, who later became Mr. Zuma’s minister of mineral resources, and Ace Magashule, the party’s current secretary general. The Gupta brothers are now believed to be in Dubai.

Eighty to 100 black farmers who were supposed to become beneficiaries of the project ended up receiving nothing — an outcome that, to many, symbolized the corruption that has flourished under the A.N.C., the party that has ruled South Africa since apartheid ended in 1994.

For years, the problems surrounding the dairy project had drawn the attention of the South African news media as well as investigators from the National Treasury. But the authorities made arrests in the case only in February, after Mr. Zuma was ousted as president.

The case is regarded as a test of how far his successor, Cyril Ramaphosa, will be able to carry out his pledge to root out corruption in government.

So far, no A.N.C. officials have been arrested or had their assets seized.