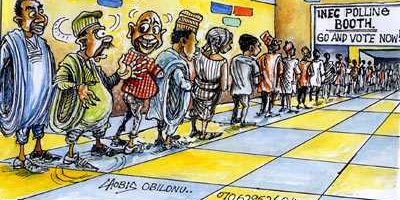 If INEC cannot conduct a free and fair election for 1.5 million voters in Anambra what is the assurance it can do so for 80 million

voters spread across the country in 2015?

Prof. Attahiru Jega, chairman of the election management body, Independent National Electoral Commission, INEC had said as much in the run-up to the election.

Speaking at a meeting with stakeholders in Awka, three days to the November 16 gubernatorial election, Jega had said:

“Our objective is to make the Anambra governorship election the best so far. But, no matter how hard we try, we alone in INEC cannot succeed without the cooperation of all stakeholders, especially political parties, their candidates and the people of Anambra State.”

However, despite his assertions and promises, the gubernatorial election has turned out to be one of the worst electoral contests in the history of the nation.

Reflective of that failure was the failure of many of the voters and notably, the candidate of the Peoples Democratic Party, PDP, Comrade Tony Nwoye to find their names in the voters register.

Several voters who went could not vote despite the possession of valid voter’s cards leading to unprecedented disenfranchisement of voters.

Those who did not find their names on the voters register were in some cases even lucky.

Many voters on that day waited to no avail for the arrival of the register itself. When the registers arrived, in many cases, they were not accompanied with the sensitive result sheets which led many voters to question the commitment of the election officers to a free and fair contest. The fear among such voters was that the election officers would subsequently go and fill in fake results in the result sheets.

Security arrangements were backed by the deployment of the Deputy Inspector General of Police, Philemon Leha and three commissioners of police to the state for the election.

An unprecedented number of security agents including soldiers were also mobilized for the election.

So with all the arrangements the commission still failed in producing an acceptable election.

At the end of the voting last Saturday, not even the most enthusiastic fans of the INEC chairman could give him a pass mark on the election.

Realizing the gaffe, Jega confessed and attributed the failure to internal sabotage.

“Our Electoral Officer in charge of Idemili North Local Government, for inexplicable reasons, messed up the distribution of ballot box papers and result sheets.

That was the cause of the delay in the distribution of materials in Idemili.

“All materials were to have been distributed by Friday evening, but for some odd reasons, they made sure that they held onto some of the result sheets, and they also gave wrong result sheets to different polling units.

“I assured the stakeholders when we met in Awka that materials must get to the polling units before commencement of election.

“So, when we discovered that there was this mix-up, and we tried to reach the Electoral Officer and the supervisor and there was confusion, and we knew something was fishy, we said there would be no deployment until we sorted out the problem.

“As I speak, we have handed over the Electoral Officer to the police because clearly what he did is a sabotage of the electoral process, including the Local Government supervisor.

“It took us until about 1pm to be able to sort out what they had jumbled up. We communicated with the community as at 1pm that we were ready to distribute to all the other wards, and materials were distributed.”

Though Mr. Kayode Idowu, the Chief Press Secretary to the INEC chairman assured that the commission is up to the task, many critics do not agree.

Interim national publicity of the All Progressives Congress, APC, Alhaji Lai Mohammed gave a damning verdict on the electoral umpire saying “as of today, INEC has lost all its credibility.

If somebody in INEC could compromise the register so effectively, that names starting with certain alphabets do not appear. We are very worried about the integrity of INEC.

The signal does not show it —Osoba

Former governor of Ogun State, Aremo Segun Osoba said, in a chat with Vanguard said “It is so shocking to think that the entire body of the so called INEC, cannot organise only one state’s elections successfully.

If they can make this kind of mess in a state, what then will they make of a 36 state situation? The situation is indefensible on all fronts and it is serious indictment of those handling INEC.

The signal they are giving now does not show a body that is capable and has the capacity to conduct a free and fair elections in 2015 in this country.”

Only Nigerians can guarantee it— Bamidele Aturu

Rights activist, Mr Bamidele Aturu, in a chat with Vanguard, said “credible, free and fair elections can only happen if Nigerians insist on it and not what INEC wants, not what politicians want. It is not going to happen because of INEC or politicians.

If they have their way, politicians will ensure that they rig elections and they will never allow credible elections.

All what politicians want is to rig elections, none of them want to go through the normal process.

So, free and fair elections can only happen if Nigerians insist on it and the only way they can insist on it, is to make sure they register, they vote and wait to defend their vote in their respective polling stations.”

Former governor of Kaduna State, Alhaji Balarabe Musa said “What has happened in Anambra state, is an indication of what will happen in 2015.

There is a lot to be done if we must have free and fair elections in 2015.”

We have to give support to INEC, we must cooperate with INEC and we must not prejudge issues.

I want INEC to improve and I think INEC has been doing fairly well and we should not allow what happened in Anambra to make us throw INEC into the dust bin because I think INEC will still perform well.

I only want to advise INEC that they should maintain neutrality but INEC is doing well and INEC should be encouraged to do better.

Political parties must play by the rules — Lee Maeba

Former Senator representing Rivers South-East senatorial zone said political parties must play by the rules for Nigerians to have a credible poll come 2015.

I believe credible elections are only possible in Nigeria when political parties play by the rules and when they avoid corrupting the Independent National Electoral Commission, (INEC) officials.

There’ll be anarchy if… — Dakuku Peterside

Chairman House Committee on Petroleum Downstream in the House of Representatives, Hon Dakuku Peterside said a lot of work must be done by INEC in order to avoid anarchy in 2015.

”A lot of work needs to be done to regain the confidence of Nigerians. If INEC fails in its responsibility, I see chaos and anarchy in 2015. However, I am optimistic that necessary changes will be made in INEC and electoral act before then”.