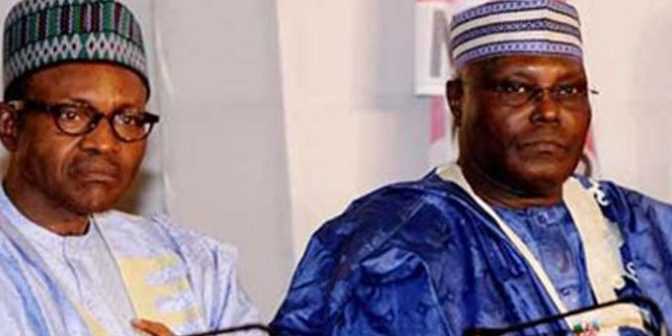 The presidential ambi­tion of two national leaders of the All Progressives Con­gress (APC), former Head of State, General Muhammadu Buhari and ex-Vice President Atiku Abubakar has begun to generate tension and division within the leadership of the leading opposition party.
As a result, the National Caucus and the National Ex­ecutive Committee (NEC) meetings held in Abuja on Thursday and Friday, respec­tively, to adopt a

modality for electing the party’s can­didates especially the presi­dential candidate at the pri­maries, failed to agree on the critical agenda.
Saturday Sun gathered that the National Caucus of the party had met Thurs­day night at the Rivers State governor’s lodge in Asokoro area of Abuja to prepare the ground for consensus de­cisions ahead of the NEC meeting scheduled for Fri­day at the party’s national headquarters secretariat also within the federal capital city.
The Thursday’s meeting was, however, said to have ended without any consen­sus as disagreements be­tween a national leader of the party and former gover­nor of Lagos State, Asiwaju Bola Ahmed Tinubu and the party’s national chairman, Chief John Odigie-Oyegun on the runnings of the party dominated half of the delib­erations.
The failure to reach the needed consensus on prima­ries was also carried over to the NEC meeting which began sitting at about 11am yesterday. Visible at the NEC meeting were Buhari and Atiku who are pushing for different methods of prima­ries. A top national leader of the party told Saturday Sun that while Atiku is comfort­able with the delegates op­tion, Buhari is an advocate of direct primary.
“The two aspirants are pushing for opposing posi­tions on the method of pri­maries to elect our candidates especially our presidential candidate. Atiku has the re­sources to mobilize delegates in his favour and as such, he is pushing for that. Buhari on the other hand relies on his mass popularity among members to get nomination and that’s why he and his people are moving towards direct primaries because it costs less”, the source, who attended both the Caucus and the NEC meetings, stated.
It was gathered that the inability to agree on the pri­mary modality on Thursday night discouraged Tinubu and a former National Chair­man of the party, Chief Bisi Akande from attending the NEC meeting eventhough both were still in Abuja at the time the meeting held.
A pro-Buhari chieftain of the party, who was at the NEC meeting, told Saturday Sun: “We prefer the direct primaries because we find it odd that even with indirect primaries, only about 20, 000 members will be deciding the choice of over 32 million members of the party.”
Also, a strong supporter of Atiku at the meeting argued: “We are okay with the del­egates option because even the NEC found it difficult to agree that we can ever find a venue to take 20,000 people if the indirect primaries op­tion is to be followed.”
To avoid any major crisis over the matter, the NEC meeting ended at about 3pm yesterday with a decision to allow the Central Working Committee (CWC) of the party consider how to reduce the number of members that will choose the presidential candidate.
“By implication, fresh con­gresses will have to be held to pick delegates from all the wards across the country”, another national officer of the party told Saturday Sun.
The party was also said to have failed to pick a definite date for its presidential pri­mary with the mind of hold­ing it after PDP’s.