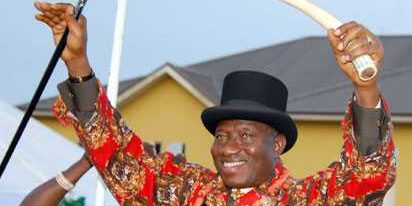 Plans by close aides of President Goodluck Jonathan to win re-election include exploiting division in the ranks of the nation’s governors, playing on the political ambitions of some Northern power brokers and the promotion of a clash of egos between the leaders of All Progressives Congress, APC, Asiwaju Bola Tinubu and Gen. Muhammadu Buhari (rtd.)

The plans, believed to have been prepared by close aides of the President ahead of the 2015 election, identified the House of Representatives, which the strategists claim to have become the mouthpiece of the opposition, the President’s ineffective utilisation of his powers and the dominance of ethnic jingoists around President Jonathan as some of the major weaknesses for the president’s second term campaign.

The strategists also cited APC, if it does not implode, the Nigerian Governors’ Forum, the Northern States Governors Forum, regional alliances, especially in the North, as some serious threats to the President in having a smooth return to power.

The strategy document, entitled 2013-2015: Political power and governance road map, believed to have been prepared in the last quarter of last year and had been the subject of speculation, came to light yesterday when it was published by Premium Times, an online news platform.

The crux of the strategy is a SWOT analysis which underpinned the President’s Strengths, Weaknesses, Opportunities and Threats in the run up to the decisive election.

In the SWOT analysis, reproduced by Premium Times, the President’s handlers also cited the strengths of the President to include the power of incumbency, access to secure cash, the backing of a formidable political structure, among others.

The document was produced after the split of PDP, but before the exit of five governors, who recently left the party for APC.

Senior Special Assistant to the President on Public Communications, Dr. Doyin Okupe, said he was on holiday yesterday, but claimed that “if the President has a plan to win the 2015 elections, I can assure you that it can never be found in Premium Times.”
The SWOT analysis read in part Strengths:

Power of incumbency and utilisation of governance machinery, especially the careful and legal deployment of its propaganda and coercive apparatus; secure financial resources base and leveraging on strategic media assets.
Others are formidable political apparatus—a reformed, disciplined and tightly controlled PDP— with significant presence in all the 36 states and dominant control over 23 states;

Deep-rooted, nation-wide support structures in the shape of Goodluck Support Group and literally speaking, hundreds of youths, women and regional affiliates controlled and supervised by the more dominant support structures;

Effective and efficient implementation of the transformation agenda in critical national sectors; high personal likeability rating, which has to be further strengthened and deepened;

When the chips are down, immense support will be secured from the National Council of State by ex-leaders who value continuity and order over instability and chaos.

•A less than forceful Presidential presence and infective deployment and application of presidential power
The perceived appropriation of presidential advocacy space by exuberant partisans and fanatical supporters who project a wrong image of the presidency as a regional agenda. This situation tends to alienate moderate political forces across the country whose sense of co-ownership of the presidency appears diminished

•A perceived sense of distance between the Presidency and the PDP that has opened the space for internal dissention and outright rebellion by party stalwarts. This sense of disinterest and disengagement has engendered a culture of apology among Presidential spokespersons whenever matters connecting Mr President and the party appear on the public sphere

•Following on the above, the reality of Mr President being the leaders of the nation and the LEADER OF THE PARTY is not sufficiently grounded

•A technocratic cabinet that is not fully politically engaged, especially in media advocacy and community-wide outreach programmes. This unhelpful situation out burdens a handful regime insiders in their constant defense of The Presidency and the Transformation agenda

•Inability of Presidential power strategists to manage the relationship between The Presidency and the NASS to the degree that the later, particularly the HOR, which is dominated by the PDP, appears as an outfit and mouthpiece of the opposition

•Problematic relationship between the Presidency and some former heads of State when, in actuality, they should constitute the bedrock of his support
Opportunities

•Exploiting the opportunities inherent in the putative fracturing of the Northern Governors’ Forum by strengthening co-operative governors and sustaining pressure, directly and through different front organizations, on the recalcitrant governors

•Playing on the political ambitions of regional champions, especially in the North, to the degree and extent that no unanimity of political purpose and cohesive agenda is ever achieved

•The APC may appear as a formidable threat initially but substantive opportunities will abound when ambitions and egos clash among its principal promoters. Strategic planning should factor in the scenario in the designing of intervention blueprint

•Exploiting the immense public opinion opportunities in the current war against terror in the North, especially given the steady successes thus far recorded by the NSA, and the military high command through the JTF

•Utilizing the social and economic empowering and inclusive space provided by SURE-P, particularly its integrated community empowerment schemes, to advertise and show case the populist and pro-people orientation of the government
Threats.
There are sufficient grounds to believe that the NASS continues to pose a threat to the effective exercise of Presidential power in the areas of budget-making processes and the on-going amendments of the constitution with specific reference to devolution of power and tenure of elected officials.