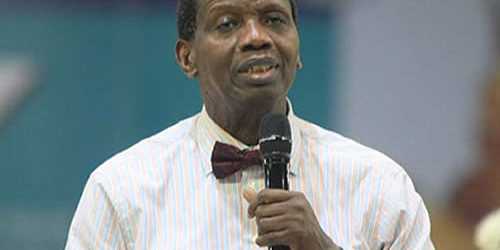 GENERAL Overseer of the Redeemed Christian Church of God (RCCG), Pastor Enoch Adeboye, has said the New Year, 2014, will determine the future of Nigeria.
ADVERTISEMENT

Adeboye, speaking on the New Year, said contrary to insinuations in some quarters that 2015 will determine the fate of the nation, “whatever will happen to Nigeria in 2015 will be determined this year, not 2015.”

Disclosing to worshippers that he was permitted only to speak out two of the prophecies God had given him concerning Nigeria, he

said the events heralding the New Year in the political landscape might not necessarily determine how the year would end.

On the international scene, Pastor Adeboye admonished the world to pray against storms, as well as monumental fire outbreaks.

He, however, said more than last year, there would be major breakthroughs in medicine and science.

“The Lord told me that there will be quite a few narrow escape from tragedies for some people. Also, divine promises of more than a decade ago will begin to find fulfilment.

“Some individuals should expect a prominent divine visitation that will radically alter the cause of their lives, while some others will experience the first taste of real dominion in the new year,” he said.

He enjoined members of the church worldwide to participate in the 100 days prayer and fasting programme commencing today, Thursday, saying similar event, which took place 18 years ago, had left fortunes of the church and individuals bewildering.

Adeboye said God told him that “the destinies of many people will be determined in 2014. It is a very powerful year and we must get the best out of it.”

Presidential tussle may tear APC apart –T. B. Joshua
General Overseer of the Synagogue Church of All Nations (SCOAN), Prophet Temitope Joshua, has revealed that unless members of the All Progressives Congress (APC) engage in fervent prayers, the party, this year, might face a serious political problem as a result of presidential tussle, which might tear it apart.

Making the prediction on Tuesday, during the candle light session to herald 2014 at SCOAN, Prophet Joshua noted that some members of APC were not sincere members.

“Unless members of APC pray well, this set of members may ignite crisis in the party, because of their selfish agenda,” he said.

According to him, the ruling party, which had been engulfed in crisis for sometime now, would employ many steps to salvage it from collapse, though he did not elaborate on this.

He also predicted that the popularity of many politicians of great repute would wane, stressing that their voices would no longer be relevant or respected.

While disclosing that he saw a cloud working against the conduct of the 2015 general election, he called on Nigerians to pray to avert unforseen circumstances that might affect the election.

In his prediction for members of SCOAN, he said he was convinced that “if members have faith in God, nothing will change their destinies.”