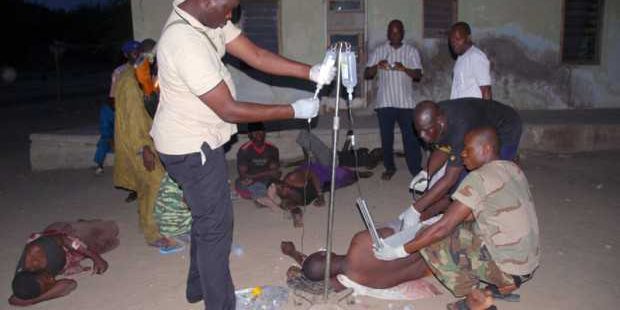 Eight  people were killed in religious violence in Nigeria on Friday, including  a Christian family of seven, while a roadside bomb killed seven others  in an area known for Boko Haram activity. The two incidents follow  deadly violence last weekend, which raised fresh questions about the  government’s strategy to end the bloodshed and a change at the top of  themilitary. In the first attack, unknown gunmen in  cars and on motorbikes burst into the family’s house in Unguwar Kajit, a  village in the mainly Christian part of Kaduna state, and opened fire,  locals said.”Christian youth provoked by the attack,  which they blamed on Fulani Muslims, mobilised and launched reprisal  attacks, burning mosques and houses,” youth leader Emmanuel Zadiok told  AFP. One person in a mosque died as it went up in flames, said Muslim resident Mohammed Yakub, confirming Zadiok’s account.Kaduna state governor Mukhtar Ramalan Yero has ordered an investigation. He condemned the attack and “prayed that God should expose the perpetrators”, said his spokesman, Ahmed Maiyaki.In the second incident, seven people  were killed and three others seriously injured when their bus ran over a  home-made bomb near Kuthra village in the Gwoza area of Borno state,  police said. The Islamist militant group Boko Haram  has scaled up deadly attacks in the border area with Cameroon in recent  months and Borno state police commissioner Lawan Tanko blamed the group  for planting the device. “The incident happened around 7:00 am (0600 GMT),” said Tanko. “The bus was about to pull over to pick  some passengers when it rolled over the IED (improvised explosive  device) planted by the roadside, causing an explosion.” A police bomb disposal unit has been combing the area for further explosives, he added.  Gwoza is some 150 kilometres (90 miles)  from the Borno state capital Maiduguri, Boko Haram’s spiritual home,  where earlier this month a car bomb ripped through a busy market,  killing 19.Boko Haram also attacked military  installations in December last year, forcing a city-wide shut-down and  raising questions about Nigeria’s counter-insurgency strategy.A state of emergency imposed on Borno  and two neighbouring northeast states in May last year has pushed Boko  Haram fighters into more remote, rural areas but attacks have continued.Last Sunday, at least 52 people were  killed in Kawuri, some 90 km by road from Gwoza, and 26 died when gunmen  stormed a church in Waga Chakawa, in neighbouring Adawama state.Adamawa is home to Nigeria’s new chief  of defence staff, Air Marshall Alex Badeh, who has vowed to defeat Boko  Haram by the end of April.Some analysts believe the Islamists may have interpreted that statement as a challenge.Friday’s attack in Kaduna also recalls  the violence following the last presidential elections in 2011, which  saw southern Christian Goodluck Jonathan defeat northern Muslim  candidate Muhammadu Buhari.Buhari’s supporters took to the streets  in the wake of Jonathan’s win, claiming the vote was rigged. Their  protest became violent and more than 800 people were killed in three  days of rioting.Human Rights Watch estimated that more  than 500 people were killed, most of the them Muslims, in southern  Kaduna, which is predominantly Christian.Nigeria is almost evenly split between  the Muslim majority north and largely Christian south. Religion and  ethnicity underpin daily life.The run-up to the next presidential vote  on February 14, 2015 has been dominated by a row between northern  Muslims in Jonathan’s ruling party, who claim a candidate from their  region should run.Jonathan has yet to officially declare  that he will stand for re-election but his apparent refusal to step  aside has prompted a series of defections of governors, lawmakers and  senators to the opposition.With reports from  (AFP)