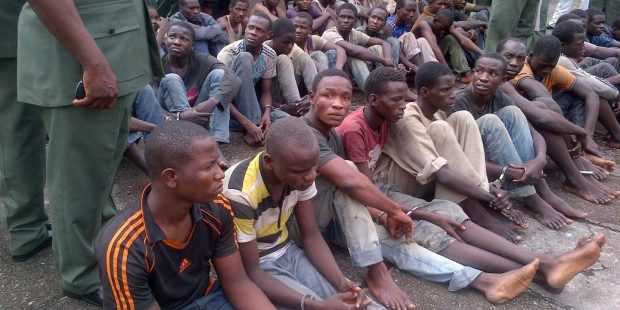 Sinister signs of security threat in Imo State emerged at the weekend when security operatives comprising men the Nigeria Police and Department of State Security (SSS) arrested young men suspected to be Boko Haram members.
Trumpeta had in recent time exposed security threats in the state, ranging from the presence of some Fulani herdsmen and lack-luster approach of the state government, to provision of certain logistics necessary for protection of lives and property. While the dust raised by that publication was yet to settle, a sad incident occurred on Wednesday night at the private home of the immediate past governor, Chief Ikedi Ohakim.

A suspected explosion rocked his prefab, Owerri home, shattering a reasonable part of the main living room after it ignited fire in the three-bedroom bungalow that served as the former governor’s abode in Owerri. The development has sparked off several interpretations from different angles concerning the cause and masterminds of the suspected bomb blast.
Barely 48 hours after the incident at Ohakim’s Owerri residence, 16 suspected Boko Haram members were arrested in Imo state. Trumpeta learnt the arrested persons are foreign nationals from Mali, Coted’Ivoire, Niger, and Senegal, countries connected with dreaded Ashabaab terrorists and Boko Haram recruit even as the state police command has dismissed the earlier suspicions claiming the arrested persons are “tourists” on transit.
The security operatives who were on a road block on Okigwe Uturu road intercepted a vehicle they were travelling with. The vehicle which was spotted at the command headquarters in Owerri where the suspects were also kept has the plate registration number of Bauchi XA 454 TSG place of destination, Ugep in Cross River state.
Trumpeta who was at the command and monitored the arrest gathered that the driver, one Ndubuisi Odoeme was hired from Owerri where the suspects supposedly resided for the trip to Ugep. When confronted, the suspects claimed they were passengers moving to Cameroun via Ugep, Cross River state capital. Further attempts to speak to them proved abortive as police interrogating team said documentation in the suspects possession were written in french language.
As at the time of this report, the suspects were still facing investigation at the police headquarters, Owerri. The names of the suspects who were not above 30 years old include Zakaria Ture (27) Senagal, Nakumbab Shairum (22) Mali, Sanugu Saidu (18) Mali, Amadu Tijan (25) Senegal, Sirajo Mbawe (22) Mali, Yuada Isuf (27) Mali, Dauda Spidu (17) Mali, Adama Bakiki (25) Senagal, Amadu Dule (18) Senegal, Zugiri Zakaria (18) Mali, Baribu Abubakar (21) Guinea, Iyaya Yalo (21) Mali, Yalo Ibrahim (24) Senegal, Sangare Karamoko (22) Cote de’ Ivoir, Mohammad Mbii (29) Mali, Sidy Siakite (19) Mali. Confirming the development, the Police Public Relation Officer, PRO, Andrew Enwerem said there was an arrest related to the matter at the state command but it was discovered they suspects were tourists from West African countries whose destination is one of the South South states.
According to the PRO in a phone interview “they are not Boko Haram members and we should not pray for that in Imo. They are foreigners from West African countries said to heading to Akwa Ibom on tourist be mission.
Though, they were arrested but taken to the command for immigration officials to come and okay their presence”, he added.
He could not go further to explain. Further calls to his mobile phone to confirm police preliminary findings and the whereabouts of the suspects were unsuccessful before press time.
It would be recalled that there was a similar incident where the Army and SSS in the state ambushed some suspects in Toyota Hiasce belonging to a popular transport company at Ihitte Uboma LGA. The foreign suspects who were also not above the age of 30 from Burkina Faso were thoroughly scrutinized before they were handed over to controller of immigration in the state for necessary information.
The reported notice by the insurgents to Army Barracks, Obinze near Owerri, prompted the soldiers to mount security road blocks and check points for stop and search on the Owerri, Port Harcourt Road.