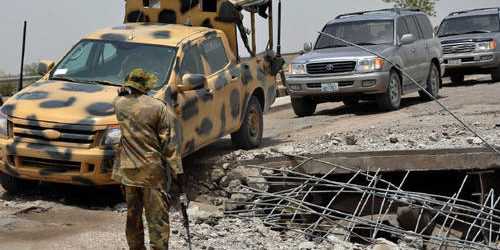 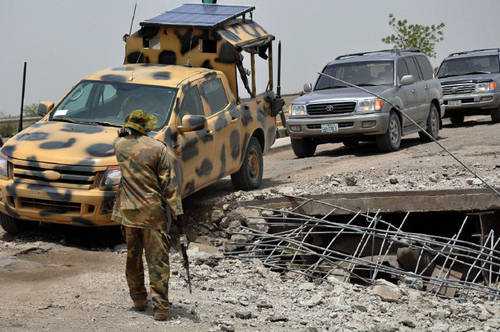 Nigerian soldiers deployed around noon today (Nigerian time) to recapture Damboa military base suffered huge casualties as Boko Haram militants ambushed them, killing at least 15 soldiers, a security source has disclosed to SaharaReporters.
The source stated that 200 soldiers had been sent on the operation to reclaim the base from the Islamist insurgents who overran it and took it over a few days ago. Our source stated

that the militants, who had hoisted their flag on the base, had dug a trench where many of their heavily armed gunmen lay in ambush awaiting what they knew would be the inevitable arrival of a contingent of soldiers to retake the base.

As soon as the soldiers approached, the Islamist militants surprised them by opening fire from their trenches, killing as many as 15 soldiers and wounding many more, said the source. “Some of the injured soldiers said that they lost 15 soldiers, but the full extent of those who died is even unclear now,” he told our correspondent.

“I went to the MRS Hospital in Maimalari barracks in Maiduguri. The hospital is filled to capacity with injured soldiers,” said the source. He added that the hospital was so stretched thatsome of the wounded soldiers were on the bare floor to receive treatment. “There’s a lack of space and facilities to accommodate the injured victims.”

Our source said the injured soldiers were enraged that they were sent on such a high-risk operation without enough firepower and troops to take out Boko Haram insurgents. “They are very angry and the atmosphere is tense,” said the source.