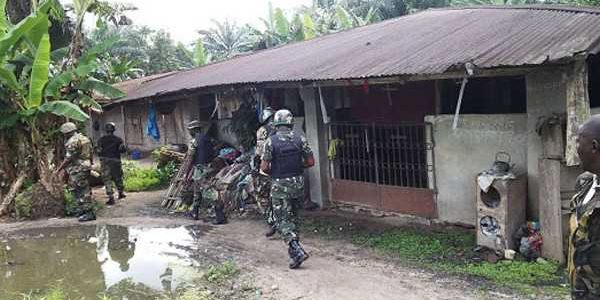 Oniarah, who was arrested by operatives of the Department of State Security (DSS) and JTF in an undisclosed hotel in Port Harcourt, the Rivers State capital. Some of his victims were Chief Mike Ozekhome and a former Anambra Deputy Governor, Dr. Chudi Nwike, who was killed in captivity.

Troops deployed in Kokori to secure the town shortly after his arrest on Wednesday came under intense gunfire, leading to a

shootout that lasted for over three hours before the youths were overpowered.

Oniarah’s close associate identified as Charles and a juju priest, Michael Omonigho, who is believed to be the gang’s spiritual head, were arrested.

Governor Emmanuel Uduaghan, who addressed reporters yesterday in Warri, confirmed the arrest, saying one person died in the clash. The Nation learnt that the governor relied on information provided by security operatives and a body retrieved from the scene.

Our independent investigation revealed that the death toll was higher than one. The body recovered from Kokori on Wednesday night has been taken to Effurun Barracks headquarters of the Sector 1 Command of the JTF.

A reliable security source involved in the operation, told our reporter: “The armed youths killed were at least 13; some of the bodies were dragged from the scene and taken to an unknown location by their colleagues.”

Our source, who craved anonymity, added that at least 25 youths of the town escaped with gunshot wounds.

It was gathered that two of the troops’ Hilux vans used for Wednesday’s operation were damaged by the hoodlums, who attempted to set them on fire by shooting the fuel tanks repeatedly.

“Luckily for us, the tank was made of plastic. They were able to destroy the tyres and we had to move the vehicle out of the town with flat tyres before fixing it,” a JTF source, who was part of the team, told our reporter.

Our reporter counted at least four bullet holes on a van marked DT-Jul-019.

At least 15 vehicles of various brands were smashed and burnt in the town; although it could not be ascertained if the destruction was carried out by the soldiers or the rampaging youths.

As a follow up to Wednesday’s incident, the 3 and 222 battalions of the Nigerian Army in Effurun-Warri and Agbarha-Otor, yesterday began a military operation to rid Kokori and neighbouring communities of remnants of Kelvin’s gang members.

Troops were also deployed to man the Orhioke-Kokori crude oil well head and manifold in the area, apparently to prevent the rampaging youths from making good their threat to set it on fire.

The operation was led by Lt.-Col Ifeanyi Otu (3 Battalion) and Lt. Col VC Ibeh of 222 Battalion.

It began with an address by Lt.-Col. Otu at about 9:35am, in front of the Isiokolo Police Divisional Headquarters and a brief workout before the troops moved into Kokori.

Lt.-Col Otu laid out the rules of engagement, warning the troops against indiscriminate use of firearms and force.

He added: “Fire control, discipline must be maintained at all times and you must remain focussed.”

At about 10:05am, 19 Toyota Hilux vans and one Armoured Personnel Carrier (APC), conveying over 100 soldiers and policemen, stormed the town.

The town was almost completely deserted, except for a handful of aged women and children who were too weak to flee.

Our reporter saw two crying children: the eldest, who is about five-year-old, identified himself as Onini. He said his parents fled on sighting the troops leaving him and his younger sibling behind.

Our correspondent, who witnessed the operation, reported that although Kokori was like a ghost town, remnants of Kelvin’s gang remained and caused problems for the troops.

The gang mounted roadblocks on the Market Road entrance to the town and dared the security operatives to cross them and move towards their hideout at the end of the town.

They also barricaded entrances to major streets with coffins and made sacrifices from dead animals and chicken, ostensibly to deter the advancing troops.

A midsize truck, which apparently conveyed drinks to the town, was seized and the bottles it was carrying broken and scattered on the road to restrict movement.

The truck was also set ablaze and its carcass used to block the road.

One of those remaining in the community, Mr. Stephen Onokayime, told our reporter that he was not part of the criminal operation.

He said he tried to dissuade the youths, adding: “They refused to listen to me.”

Uduaghan vowed that the military operation would continue until all remnants of Kelvin’s men and their supporters were arrested.

He said: “The overall objective (of military operation) is to flush out the criminal gangs, get their arms and ammunition and restore normalcy to the town.”

He imposed a dusk-to-dawn curfew on the town, saying nobody should be found outside the community once it is past 6pm.

Uduaghan advised persons living in communities, such as Eku, Abraka and others to ensure that they did not move about aimlessly.

The governor lamented that the people of Kokori backed the criminals, saying: “It is a shame that Kokori women came out dancing with their children holding guns. In other places, women dance with their graduating children.”

He said innocent people would be spared, adding that all must bear some pains to wrest the town from the hoodlums.

The governor assured oil companies of adequate security, urging them to ignore the threat of the so-called Liberation Movement of Urhobo People.

How Kelvin was arrested

Fresh facts obtained by our reporter revealed how Kelvin, whose operations reportedly spread across the Niger Delta and beyond, was nabbed on Wednesday. His car was bugged and a tracker installed.

Contrary to initial report that he was tracked after last Wednesday’s 60-day ultimatum to the Federal Government, The Nation authoritatively gathered that security operatives had been on his trail at least two weeks before the declaration.

It was gathered that a section of the security services was blanked out from the investigations because of concerns that some of them may have been compromised by the gang.

A top official of the DSS said Kelvin escaped arrest for so long by shunning a luxury lifestyle and moving about in taxis and vans.

“He usually drove around in rickety vehicles used as taxi. That way he was able to avoid drawing attention to himself. That was how he was able to beat all checkpoints around the area.”

Besides, it was gathered that the JTF narrowly missed arresting him months ago, when he killed two of his close friends who he accused of giving information to the security apparatus of the state government.

“What he did was to get the phone of those his aides and he dialled the number of some security top shots who he knew were working on his case. He was surprised to find that the boys had the number. Without wasting time, he wasted them both,” our source said.

It was gathered that the death of the two moles hampered investigations until the SSS stepped in, infiltrated his camp and bugged his car.

“From what we have heard, heads may roll if the confessions made by Kelvin so far turn out to be true, because he said so many things and implicated so many people, including a very high-ranking officer of the Nigerian Army,” a source said yesterday.

Asked to comment on the alleged involvement of politicians in funding and arming the hoodlum yesterday, Uduaghan said a full-scale investigation would be conducted, adding: “At the end of the day, the full story of Kevlin will be told. Let us not be biased at this moment.”

Uduaghan hinted that heads could roll in Agbon Kingdom and Kokori, where he said Kelvin was backed by his kinsmen.

The governor said: “We (government and the monarch) are having very deep discussions. We are in touch with the king. We believe that certain persons in that community (Kokori) have questions to answer. No matter how big or how high they are, we will fish them out.”