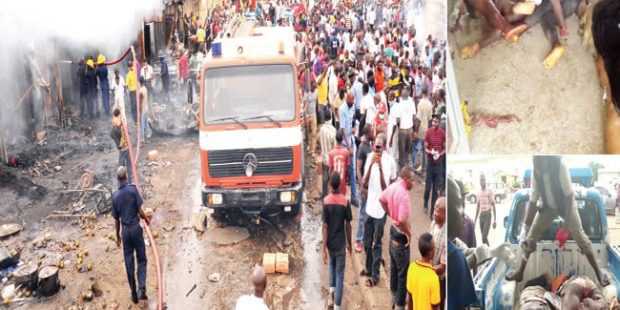 The relative peace in Jos, the Plateau State capital, was shattered yesterday when twin-bomb explosions went off in the city, killing about 118 people.

“The exact figure of the dead bodies recovered as of now is 118,” Mohammed Abdulsalam, co-ordinator for the National Emergency Management Agency, NEMA, North-Central, told AFP.

He added that “more bodies may be in the debris” of buildings which collapsed due to the intensity of the blasts.

Fifty-six people were injured in the twin blasts, said Abdulsalam.

A suicide bomb attack on Monday in Kano killed five people, while a second explosion was averted hours later by the police.

The two blasts occurred in a densely populated market area on Murtala Mohammed Way, close to the old site of the Jos University Teaching Hospital.

The first blast which occurred around 3.28pm shook most of the buildings around the vicinity.

Another blast was heard close to the scene 14 minutes later.

Our reporter gathered that two vehicles laden with explosives were left in the area, which had been turned into a makeshift market since the Jos main market was burnt down several years ago.

Thick smoke billowed from the scene after the explosions which could be seen many kilometres away.

Fire fighters, men of the Special Task Force and ambulances rushed to the scene and took control, preventing the engulfing inferno from spreading to other areas.

The blasts, which caught the traders and buyers unaware, according to an eyewitness who did not want his name mentioned, claimed over 100 persons.

Our reporter, who was at the scene saw burnt bodies of victims being carried in wheelbarrows. Also, chunks of human flesh and body parts were seen littering the area and some could be sighted as far as Ahmadu Bello Way.

Many properties were destroyed and the fire was assisted by the second-hand clothing spread on the ground and in the stalls, sending dark smoke noticeable in every part of Jos

. According to an eyewitness, Peter Amine, “We were inside the market when I heard a loud explosion at about 3:28pm. Before I knew what happened, a vehicle part landed just by my legs”.

He said that a thick dark smoke engulfed the scene, compounding the already chaotic situation as horror-stricken persons ran in all directions.

Another survivor, who gave his name simply as Chong, said he was at the market when the explosion occurred.

“I heard a very loud sound. I did not know what to do but I know it was God who saved my life,” he said.

Most of the injured people were rushed to the Jos University Teaching Hospital, JUTH, and the Plateau Specialists Hospital.

The blasts sent panic all over the town as people rushed to lock offices and shops while parents whose wards were still in school hurried to pick them up.

Windscreens of vehicles were broken and several traffic accidents were recorded as people rushed home immediately after the blasts.

The road leading to the Plateau Specialists Hospital was blocked by security operatives to prevent a possible breakdown of law and order, but sympathisers were seen trooping in to the wards searching for their relatives. Meanwhile, the Plateau State government has condemned the bombings.

The Commissioner for Information, Olivia Dazyem, who addressed journalists in Jos, appealed to all hospitals in the state to attend to the injured.

He said: ‘Full investigations are ongoing to unravel those behind the attacks. This is a trying moment for the country and I am appealing to citizens of the state to be alert and security conscious.’

NEMA declared that the casualty rate could be best described as catastrophic.

“I can’t tell you the figure of those killed by the blasts now, because we are still evacuating bodies from the scene.

“The only thing I can say is that the casualty figure is very massive. It is a catastrophe,”

“The bombers parked the cars and left the explosives to detonate. It was in the market and at a peak period. So, you can only imagine what could have happened,” he added.

The state Police Commissioner, Chris Olakpe, however, confirmed that 46 persons had so far been confirmed dead.

According to him, investigation revealed that a suicide bomber who abandoned his car at the terminus market axis later came back to detonate the explosive.

“Thirty minutes later a Sienna bus also laden with IEDs also exploded killing more persons. So far, 46 corpses have been deposited in various hospitals in the state, while 45 persons are hospitalised,” he said.

The senator, who spoke through his media aide, Chuwang Dung, said it was wickedness of the highest order for some people to take pleasure in killing their fellow human beings.

President Goodluck Jonathan also yesterday condemned the bomb blasts, describing the perpetrators of the tragic assault on human freedom as cruel and evil.

The Special Adviser to the President on Media and Publicity, Dr. Reuben Abati, in a statement in Abuja also disclosed that the President had directed relevant agencies to mobilise support and relief efforts in aid of the victims of the blasts.

He also extended his heartfelt sympathy to the affected families of the victims.

Abati said to combat the menace of the Boko Haram sect and strengthen border security, Nigeria and her neighbouring countries of Niger, Cameroon, Chad and Benin Republic had agreed to contribute one battalion of troops to the International Force set up to patrol the border areas.

This, he said, was in line with the Resolution of the Lake Chad Basin Commission.

Abati stated that President Jonathan reaffirmed Nigeria’s commitment to the implementation of the resolutions reached by the summit, in addition to existing measures already being taken by the administration to combat terrorism and ensure the safety of lives.

He stressed that the Federal Government was prepared to strengthen existing mechanisms to ensure the immediate implementation of the resolutions of the summit, including taking necessary measure to find the students abducted by Boko Haram terrorists from the Government Girls’ Secondary School, Chibok, Borno State, on April 14.